As a result of a concerted anti-eucalyptus campaign, a number of myths exist. Owing to these myths, felling of eucalyptus seldom considers negative environmental effects on insects, birds and animals – and people.

1. Eucalyptus only lives about 100 years, so they’re reaching the end of their lives. (FALSE)

This is often used to justify tree-felling. Here’s an example of a news item in the Chronicle, based on interviews with [Sutro Stewards Executive Director] Craig Dawson and with UCSF. But it’s a myth. Eucalyptus in the tropical and arid areas of Northern Australia tend to get killed by termites and fire before they’re 200 years old. In temperate, rainy Southern Australia they live 400-500 years. San Francisco is much closer to Southern Australia in climate, since it lacks wildfires and cyclones and receives rain as well as summer fog drip.

“Growth Habits of the Eucalypts” by M.R. Jacobs, (Institute of Foresters of Australia, 1955, 1986): “Blue Gum eucalyptus lives in Australia from 200-400 years, depending upon the climate.” In milder climates, such as San Francisco, the Blue Gum lives toward the longer end of this range.

2. Nothing grows under eucalyptus trees because they poison other plants. (FALSE)

A ramble through an unspoiled eucalyptus forest will disprove that as effectively as possible. In many places, the undergrowth is dense enough to impassible in most places, and trails have to be hacked into the forest.

Thanks to commenter Gus for a scientific explanation on his blog in a post called: Seven Key Issues on Eucalyptus and Alelopathy.  (See comments at the end of this page.)

Eucalypt flowers are mainly pollinated by insects, but birds and small mammals may also act as pollinating agents.

From photo by Susan Walter

In fact, eucalyptus is particularly valuable as bee pasture, because it blooms year-round. It gives the honey a distinctive peppermint taste. (Oh, and Honey Bees aren’t native either.)

The hollows in older eucalyptus trees also provide homes to animals, birds — and wild bees as in this bee tree picture.

[Edited to Add: However, this is not saying that eucalyptus is never allergenic: some people are sensitive to eucalyptus pollen, and they will get allergic reactions to it. It’s just not as allergenic as the lighter pollens of oak and grasses and mountains cedar.]

Birders have identified over 40 species of birds in Sutro Forest. This article has a list and pictures. This is not unique to Sutro Cloud Forest. From a Nature Conservancy assessment:

The wildlife in a Eucalyptus forest varies depending upon the geographic location of the grove. At Jepson Prairie Preserve, CA, Swainson’s hawk and yellow warblers, both of which are “Blue Listed” species of concern, nest in the trees. At Pescadero Creek County Park, south of San Francisco along the coast of California, great blue herons and egrets use the trees to build their rookeries. 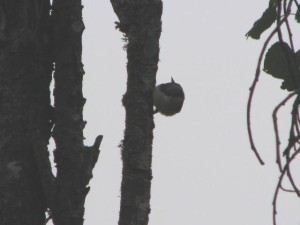 “Over 100 species of birds use the trees either briefly or as a permanent habitat. The heavy-use birds feed on seeds by pecking the mature pods on trees or fallen pods; so they must wait for the pods to disintegrate or be crushed by cars. .Among the birds that feed on seeds in the trees are: the chestnutback chickadee and the Oregon junco. Examples of birds that feed on ground seeds are the song sparrow, the fox sparrow, the brown towhee, and the mourning dove. Birds that take advantage of the nectar from blossoms either by drinking the nectar or by feeding on the insects that are attracted to the nectar include Allen’s hummingbird, Bullock’s oriole, redwinged blackbird, and blackheaded grosbeak. 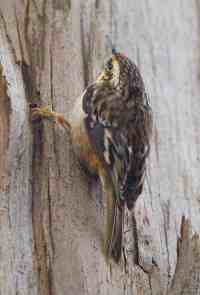 “Birds that use the trees as nest sites include the brown creeper, which makes its nest under peeling shags of bark and feeds on trunk insects and spiders, the robin, the chickadee, the downy woodpecker, and the red shafted flicker. The downy woodpecker and the red shafted flicker peck into the trunk of dead or dying trees to form their nests. When these nests are abandoned, chickadees, Bewick wrens, house wrens and starlings move in. Downy woodpeckers use dead stubs to hammer out a rhythmic pattern to declare their territories.

“The red-tailed hawk prefers tall trees for a nesting site. It therefore favors eucalypts over trees such as oak or bay. Great horned owls use nests that have been abandoned by red-tail hawks or they nest on platforms formed between branches from fallen bark. The brown towhee and the golden crowned sparrow are birds that use piles of debris on the ground for shelter during rains.”

This myth is traceable to a conjecture that was presented as a theory, and repeated as a fact – a 1997 article that has benefited from a “signal-boost” from the anti-eucalyptus campaign. It argues that unlike the long-beaked Australian birds, which co-evolved with the eucalyptus flower, short-beaked Californian birds get their faces gummed while foraging in eucalyptus flowers and suffocate.

This ignores the facts:

(1) Australia has numerous short-beaked bird species foraging in eucalyptus and has no evidence of beak-gumming.

(2) The eucalyptus flower is not especially deep.

(3) Other birders have not seen evidence of high mortality under eucalyptus trees.

Here’s a detailed article, with pictures.

7. Eucalyptus groves have no wildlife. (FALSE) 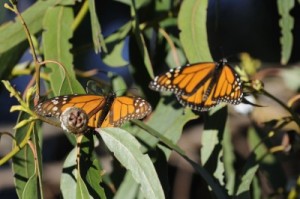 Migrating monarch butterflies depend on eucalyptus groves as a wintering spot. This is true not just in Pacific Grove, but even as close by as Fort Baker (below the Golden Gate Bridge). [ETA 2011: And also in San Francisco.]

And that’s just the start.

“Contrary to popular belief, many animals, both vertebrates and invertebrates, have adapted to life in the Eucalyptus groves. Moisture from the air condenses on the leaves and the drippage keeps the groves moist and cool even during the dry season. This is a suitable ground habitat for a wide variety of animal life. Amphibians such as arboreal salamander, California slender salamander, ENSATINA, California newt, rough skinned newt, and Pacific tree frog live in the forest, primarily under fallen logs and duff. Amphibians feed on such invertebrates as millipedes, centipedes, sow bugs, COLLENBOLA, spiders and earthworms.

“Several snakes such as the ring-necked snake, rubber boa and sharp tailed snake have adapted to Eucalyptus groves. The ring-necked snake feeds on the California slender salamander, the rubber boa feeds on meadow mice, and the sharp tailed snake feeds strictly on slugs. Other common reptiles include the northern and southern alligator lizards, which live under fallen logs, and the western fence lizard and western skink, which live in the less densely forested groves.

“Several mammals have adapted to Eucalyptus. Deer find concealment in dense groves where there are suckers, coyote brush, and poison oak; moles live in the surface layer of the soil, meadow mice, gophers, and fox squirrels are found in the forest.

“A Eucalyptus grove is not a sterile environment. The population density of the animals mentioned can be partially attributed to the presence of eucalypts. With a program of cutting trees and burning debris, some animal residents will disappear because they have restricted home ranges or are sedentary. If an animal’s living area (leaf litter, logs, bark) and food supply are destroyed, the animal will either die or attempt to move to another area which is already fully occupied.”

Barely. In fact, in the San Francisco Bay Area, eucalyptus forest cover actually declines, not invades, based on sixty years of research by William Russell (USGS) and Joe Mc Bride (UC Berkeley). There’s a good article about it at Death of a Million Trees, a blog against unnecessary tree-felling.

California Invasive Plant Council reviewed its rating in 2015 and now considers Eucalyptus as having Limited invasiveness – its lowest rating.

It comes from Australia, and was brought here around 150 years ago. (We’re not native either. Are you? Where were you 150 years ago?) Nothing we eat is native either: Corn, peaches, avocado, broccoli, strawberry, artichoke, chicken, beef. In fact, the only “native” product in most people’s diet is fish.

10. It easily drops branches and poses a threat to people beneath. (MOSTLY FALSE)

All trees drop branches – or even fall over – under certain circumstances.

Tree-fall fatalities are very rare. [ETA Aug 2011: We found a 2008 study from Kent State University; in the 12 years from 1995-2007, there were 407 tree-related fatalities in the US – an average of about 34 deaths per year. These are concentrated on the East Coast owing to a combination of trees and tornadoes. By comparison, lightning kills an average of 62 people annually in the US.]

Three tragic deaths in the Bay Area were caused by an oak tree (a 2010 winter storm knocked it into tent cabin in Santa Rosa); American elm (a San Jose toddler was killed by a falling tree in 2010); and a redwood (a San Francisco woman in 2008). Another serious non-fatal injury was caused by an oak tree during the 2009 Vineman triathlon in Sonoma. And in 2003, a dead Monterey Pine fell on a car on Brotherhood Way, killing a woman.

[ETA Aug 2011: An oak tree fell on an SUV in Napa Valley in March 2011, killing a Vallejo man. And an oak branch fell and seriously injured a 16-year-old girl on a Russian River camping trip in 2000. ETA July 2013: A black oak tree broke and killed a counselor at Camp Tawonga near Yosemite.]

11. Epicormic growth in eucalyptus (young blue-green leaves along the trunk and branches) means the tree is dying. (FALSE)

Eucalyptus trees respond to drought and other stresses by shedding leaves and twigs to reduce moisture loss through transpiration (tree-breathing). Later, they can grow new leaves and branches from “epicormic buds” buried deep under the bark. It’s a defense mechanism that keeps the tree alive, not a sign that it’s dying.

In addition, epicormic sprouting can be a response to fire damage, to increased light (as when nearby trees are cut down), or even just a normal process of tree growth. More details in the article HERE.

12. Eucalyptus is extremely flammable and is involved in most California wildfires. (MOSTLY FALSE)

In fact, native plant areas – the scrub and wild-flowers known as chaparral – are more flammable than any tree. Eucalyptus is actually fire-resistant. In fact, it may actually fight fires by acting as a windbreak and blocking flying embers. It will burn in forest fires, but so do all trees. Many people think of the devastating Oakland Hills fires; but a inquiry there noted that trees were not the primary hazard – not even eucalyptus trees. (Click here for a post on that subject.) Grass fires are actually more dangerous (click here for more on the subject). There’s also an excellent post on the Death of a MillionTrees website on the subject.

And here’s a detailed article: Why Native Plants are more Fire-Prone than Eucalyptus

The research shows that eucalyptus forests have as much diversity as the ecosystems that nativists want to replace them. Dov Sax showed that eucalyptus forests in California had as many or more species as the oak forests. “Species richness was nearly identical for understory plants, leaf-litter invertebrates, amphibians and birds; only rodents had significantly fewer species in eucalypt sites. Species diversity patterns…were qualitatively identical to those for species richness, except for leaf-litter invertebrates, which were significantly more diverse in eucalypt sites during the spring.” (Reference: Dov Sax, “Equal diversity in disparate species assemblages: a comparison of native and exotic woodlands in California,” Global Ecology and Biogeography, 11, 49-52, 2002.) Studies elsewhere showed similar results – except that new forests that are only a few years old have fewer species than more established forests.