One would think that in these times of climate change and San Francisco’s small and shrinking tree canopy, every effort would be made to save the trees we already have. San Francisco  already has only a 13.7% tree canopy cover, less than any other major city. 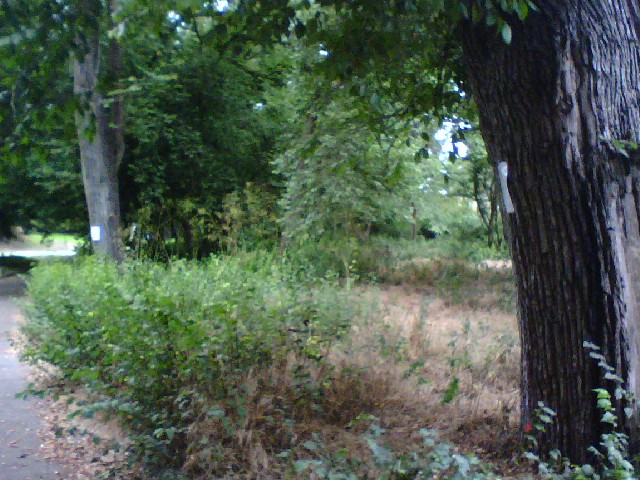 The reasons? That they might potentially fail – which is true of any tree. And, they’re an “Invasive Species.” Given that they were *planted* there, it’s pretty clear they are not invading anything. San Francisco has no native trees. It was sand dunes and scrub. These “reasons” could be used to cut down any tree at all in our city. (We will try to obtain a clearer picture of this notice.) 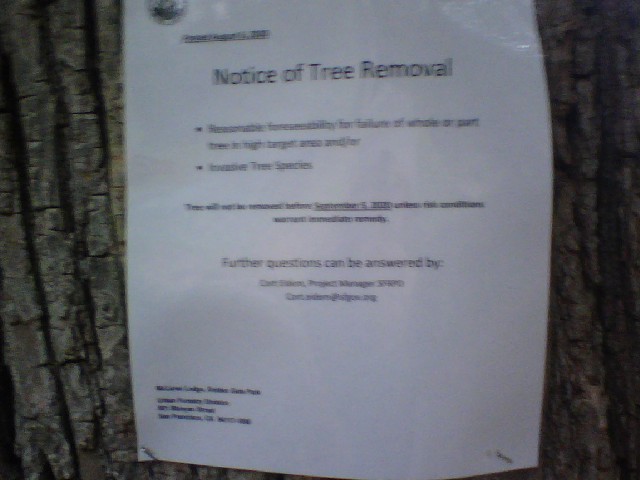 Edited to Add: The text of the notice reads:
Posted August 6, 2020
Notice of Tree Removal
Reasonable foreseeability for failure of whole or part tree in high target area and/or Invasive Tree Species.
Trees will not be removed before September 6, 2020 unless risk conditions warrant immediate remedy.
Further Questions can be answered by Cort Eidem Project Manager
Email: cort.eidem@sfgov.org

Wendy notes that the trees are in the area of JFK Drive and Fulton, between 6th and 8th avenue – but the trees are not on JFK, Fulton, or any main walking paths. These are on small side paths that are little-used. That doesn’t sound like a high target area.

It’s not as though San Francisco is so heavily forested that it can afford to wantonly destroy its trees, especially the mature well-established ones. Its tree cover is only 13.7%, less than any major city.

In fact, even the city government admits that, in the Planning Department’s Urban Forest Plan.

“Small and Shrinking Tree Canopy
San Francisco has one of the smallest tree canopies of any major U.S. city.
San Francisco was naturally a non-forested environment with fewer trees than east coast or other forested environments. Today, the City’s urban tree canopy (13.7%), measured by the amount of land covered by trees when viewed from above, is one of the smallest of any large U.S. city – less than Los Angeles (21%), Chicago (17%) and New York City (24%) – and unfortunately, it’s on the decline. New plantings are not keeping pace with tree removals and mortality, while tens of thousands of potential street tree planting spaces remain empty.”

Cutting down healthy and mature trees is certainly one of the reasons that this tree canopy is shrinking instead of growing.