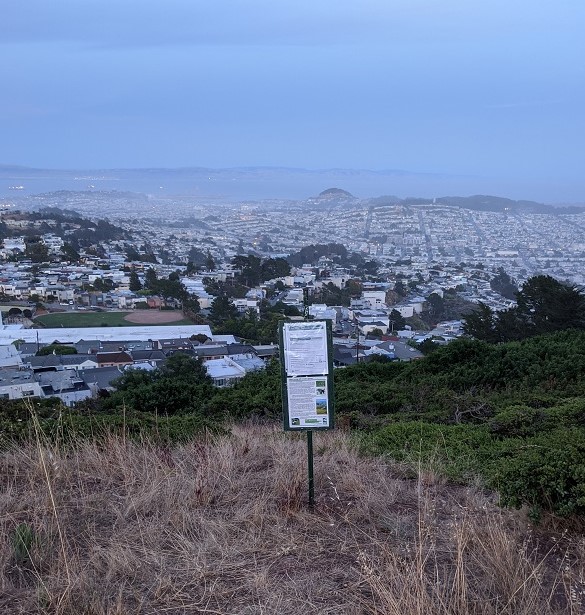 One of our supporters reports the “Natural Resources Department” (NRD) of  the San Francisco Recreation and Parks Department (SFRPD) is using a new pesticide on Mt Davidson: Vastlan (from Dow). It’s being applied in a so-called “natural area” now named a “significant natural resource area.”

Only, the pesticide is not really new: the active ingredient is triclopyr. This is the same as Garlon, the highly toxic pesticide that has been listed as HIGH PRIORITY TO FIND A REPLACEMENT since at least 2009.

SF Department of the Environment – SFEnvironment – groups those pesticides that the city permits to be used on city properties into three Tiers. Tier III is least hazardous; Tier II is More Hazardous; and Tier I is Most Hazardous.

In 2019, SF Environment added Vastlan to the list of pesticides permitted for use on city-owned land, with a Tier II classification  (as compared with Tier I for Garlon 4 Ultra). It’s been listed as a Lower hazard alternative to Garlon 4 Ultra. You can see the 2019 “Reduced Risk Pesticide” list here: SFEnvironment Reduced Risk Pesticide List 092419

Though it’s Tier II, the restrictions on its use are the highest, i.e. “Most limited“  and the note against it says: “Use only for targeted treatments of high profile or highly invasive exotics via dabbing or injection. May use for targeted spraying only when dabbing or injection are not feasible.” This is exactly the same as for Garlon 4 Ultra, which was Tier I (and is being phased out with a “Use up existing stock” note).

… BUT SFRPD IS USING IT MORE BROADLY

But. Based on what we’ve seen with other pesticides, NRD seems to respond to the Tier rating rather than to the Use Restrictions. Already, they’ve used Vastlan on “Poison oak and other encroaching shrubs.” This is a broader use than Garlon 4 Ultra, which they had limited to oxalis. 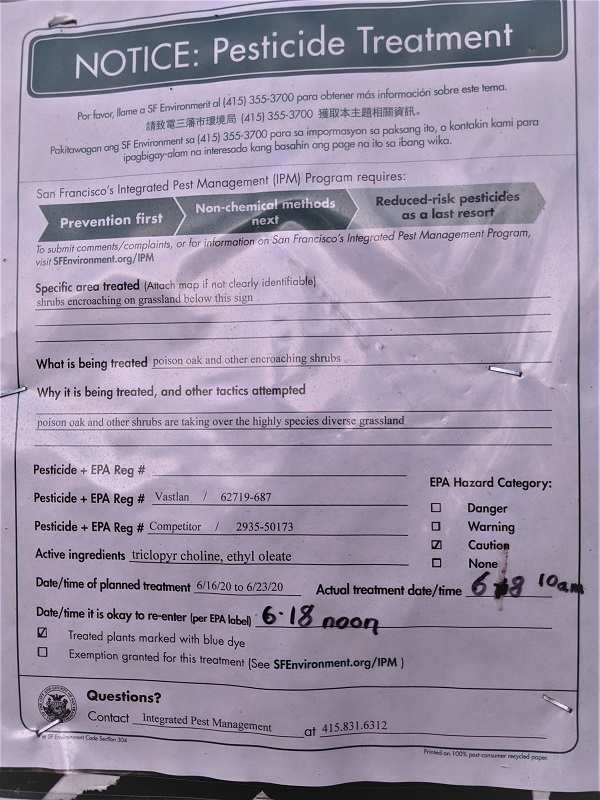 IS IT REALLY SAFER?

Frankly, we are also dubious about whether Vastlan is actually safer than Garlon 4 Ultra. (The company has reduced its signal word from Danger to Warning.)
Vastlan has not been in use long enough for its risks to become apparent, and it’s always in a company’s interests to understate them if possible. The saga of the FDA and Monsanto’s Roundup suggests that they may also be understating risks.

Dow’s Label for the pesticide can be read at the link:  Vastlan label Dow
It includes the warning:

WARNING
May be fatal if swallowed • Causes substantial but
temporary eye injury • Prolonged or frequently repeated skin
contact may cause allergic reactions in some individuals.
Do not get in eyes, on skin, or on clothing.