Pesticide Use Up in San Francisco Parks, Natural Areas – 2019

In 2019, SFRPD applied herbicides 243 times, the most since 2013. Of these, 144 applications were in “Natural Areas” (this includes PUC areas managed in the same way – i.e. use of toxic herbicides against plants they dislike). Though the Natural Areas comprise perhaps a quarter of the park land in San Francisco (not counting the PUC lands), they used nearly half the herbicides measured by volume of active ingredient.

As we have been doing for some ten years now, we obtained and compiled monthly pesticide use reports from San Francisco Recreation and Parks Department (SFRPD).  Our analysis omits Harding Park golf course, which is under contract to the PGA and must be tournament-ready at all times. We do include other golf courses, including the nearly pesticide-free Sharp Park in Pacifica. Here is our report for 2019.

The Natural Resources Department (NRD, formerly the Natural Areas Program or NAP) is the entity that in trying to bring “native” plants to more than a thousand acres of our parks, cuts down trees and restrict access to people and their pets. (For details, see this LINK.) We analyze their usage separately; they are the largest user of the most toxic (Tier I) herbicides.

The targets are a growing list of mostly non-native plants, currently more than 50 species. New to the list in 2019 are Ox tongue (Picris echioides), Velvet grass, Queen Anne’s Lace (Daucus carota), and Teasel (Dipsacus). (SF Department of the Environment – SFEnvironment – groups those pesticides that the city permits to be used on city properties into three Tiers. Tier III is least hazardous; Tier II is More Hazardous; and Tier I is Most Hazardous.)

The Tier I (Most Hazardous) chemicals used in the Natural Areas are the probable carcinogen Roundup Custom (glyphosate) and Garlon 4 Ultra (triclopyr). As indicated in the column-chart NRD Herbicide Use 2014-2019, Tier I pesticide usage fell in 2016, and has been climbing since. In 2019, both Roundup (green column) and Garlon (orange) usage rose.  In 2019, Natural areas/ NRD accounted for 98% of the Tier I herbicides used by SFRPD. Herbicides are applied in these areas both by the NRD itself, and by an outside contractor. (On Point Land Management, associated with former contractor Shelterbelt.) Unless NRD changes its objectives, it will always need herbicides – Roundup, Stalker/ Polaris, Milestone VM, Garlon 4 Ultra. If it reduces one, there’s a temptation to increase another.

Even Sharp Park in Pacifica (also managed by NRD), which had been practically exempt from herbicide use for many years, has seen pesticide use edging upward since 2017.

THE ILL-ADVISED AND TOXIC WAR ON OXALIS

The continued increase in the use of Garlon (triclopyr), the most toxic herbicide that SFEnvironment permits is disturbing. Ever since we started following herbicide use in SFRPD, it’s been declared “HIGHEST PRIORITY TO FIND ALTERNATIVE.  It’s used in their perennial, pointless, and apparently escalating war on oxalis. NRD increased its use of Garlon by about 90% from 2017 to 2018, and now by a further 14% in 2019. If NRD were to call off this futile effort, it could reduce its Garlon usage to zero. 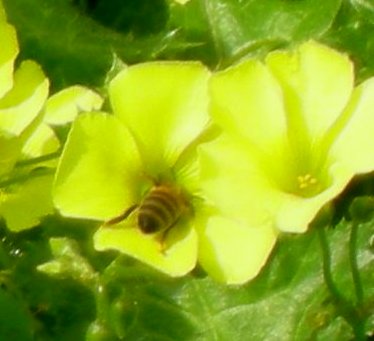 Oxalis is a beneficial plant: It produces copious amounts of nectar, which is food for bees, butterflies, and other pollinators. Its bulbs provide food for (native!) pocket gophers and some birds. Its brilliant yellow flowers bloom early in spring, before most other flowers. Kids like to chew on its sour stems (it’s also called sourgrass) and even adults have fond memories of this plant. Other than nativist purists, most people love it for its beauty – it’s a sign of spring in San Francisco.

After reducing its pesticide use in 2016, SFRPD (excluding Harding, and excluding NRD) increased its use of herbicides each year. In 2019, it more than doubled. The main cause was the use of Clearcast herbicide in and around lakes and ponds, as well as Milestone being used in its war on Cape Marigold. The main increase has been in “Other Tier II herbicides” – mainly Clearcast and Lifeline. These are glufosinate ammonium herbicides. They also used Axxe, which may not be as bad as some others; it has an OMRI listing for organic use. The only small positive is that since 2017, SFRPD other than NRD and Harding Park, has used almost no Tier I herbicides.

SFRPD also used 482 fluid ounces of Avenger (by active ingredient), which we have omitted from the chart above.  Avenger is based on lemongrass oil, or what is called a “botanical.” It’s actually considered acceptable for organic gardening. However, it’s classified as Tier II because it can cause allergic reactions in its undiluted form.

The percentage of herbicide use by NRD has fallen (from 70% in 2018 to 46% in 2019) because usage by other SFRPD departments has increased even more rapidly than usage on NRD lands.

One of the main reasons is that they used a lot of Clearcast against water-primrose (ludwigia) and other plants – including calla lilies! – in and around San Francisco’s ponds and lakes.

In 2018, SFRPD declared war on Cape Marigold, arctotheca.  Cape Marigold (also called the Plain Treasure Flower) has bright yellow flowers that look like daisies.  It’s a ground-cover plant in the aster family, has a fairly long flowering period, and is attractive to butterflies, bees, and other pollinators. SFRPD considers it “invasive” – i.e., successful in the urban environment we currently have in San Francisco. This “war” has continued into 2019, resulting in 32 applications of Milestone. This pesticide is applied in small quantities, but is extremely persistent.

What about the other golf courses? Their pesticide use is minimal. They used 18 fluid ounces of Lontrel (clopyralid).

KILLING THE WEEDS THE INSECTS NEED

At a time when environmentalists are concerned about the reduction in insect populations, we should be working to preserve our “weeds.” Unlike many garden plants, which are bred for attractive flowers and often have less value to insects, these weeds flower early and abundantly. They provide food for insects of all kinds, the foundation of the web of life. But many of the target plants are beneficial to insects:  eucalyptus, the world’s largest flowering plant;  oxalis, a foundation species in our urban ecosystem; fennel, the food plant for the anise swallowtail butterfly; wild radish; wild mustard; blackberry, which provides not only food but cover for birds and animals… the list goes on.

It’s time for SFRPD and SF Environment to move to a more environment-friendly approach: Preserve the plants that wildlife needs and stop using toxic and persistent pesticides.

We would like to see SF Environment take the leadership in moving San Francisco to a policy of No Pesticides in our Parks and Watersheds.