Roundup: Probably Carcinogenic, and What Else?

It’s now widely known that Roundup has been found to be a probable carcinogen by the World Health Organization. (We wrote about that here: WHO – Roundup Probably Carcinogenic).

This is particularly disturbing, because it’s a very widely-used pesticide and the amounts found in humans have increased 5x since 1994 according to a UCSD study. Not only is it used in agriculture, it’s (still) used in our parks. Marin County has prohibited its use on public properties, but San Francisco’s Department of the Environment only reclassified it from Tier II (More Hazardous) to Tier I (Most Hazardous). The Natural Resources Department (NRD) of San Francisco Recreation and Parks Dept (SFRPD) continues to use it. 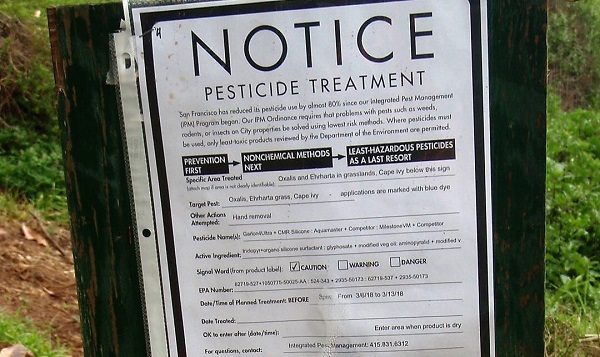 But it’s not just a probable carcinogen. Research indicates a bunch of other issues:

It’s very likely to also be an endocrine disrupter, which means it acts like a hormone in the human body, and can be a problem at very low doses.

In a letter an EPA scientist Dr Marion Copley sent before she died, she not only said it was carcinogenic, she noted “glyphosate was originally designed as a chelating agent…” and lists the issues with chelating agents, including, “Chelaters are endocrine disrupters…” (That article is here: “It is essentially certain that glyphosate causes cancer.”)

If you want to read about how endocrine disruptors work, that’s a link to the National Institutes of Health website. It notes: “Research shows that endocrine disruptors may pose the greatest risk during prenatal and early postnatal development when organ and neural systems are forming.”

A paper published May 2010 in the journal, Chemical Research in Toxicology linked glyphosate to birth defects in vertebrates. We’d like people who have assumed that Roundup’s problems come mainly from its surfactant POEA to take a look. (This is not to say POEA is harmless. That has been implicated in embryonic cell death also, in a 2008 French study published in the same journal.)

In Argentina, glyphosate (the active ingredient of Roundup) is widely used on soybean. In soybean-growing areas, there were reports of increased birth defects of a particular type: malformed heads, eyes, and brains. A groups of researchers therefore decided to investigate whether glyphosate could indeed cause that type of birth defect.

Women of child-bearing age should be especially careful. The most vulnerable period, according to the paper, is in the first 2-8 weeks of pregnancy. Many people don’t even know they’re pregnant that early on. Furthermore, even the mature placenta is permeable to glyphosate. After 2.5 hours of perfusion, 15% of it crosses over.

The actual article, which we read elsewhere describes some of the birth defects: microcephaly (tiny head); microphthalmia (tiny undeveloped eyes); impairment of hindbrain development; cyclopia (also called cyclocephaly – a single eye in the middle of the forehead, like the picture here); and neural tube defects. These are quite devastating. Many fetuses do not come to term, and many babies with these conditions die within hours or days.

There’s some evidence that glyphosate interferes with male reproduction, too. A 2014 article published in Science in Society in the UK, entitled “Glyphosate/ Roundup and Human Male Infertility” links glyphosate to falling sperm counts and lowered testosterone levels.

National Institutes of Health published a  paper in August 2000 that indicated Roundup interfered with reproductive hormones in rats.

Other research has implicated glyphosate in other risk factors, particularly since it can disrupt gut bacteria in humans. We wrote about that here: Pesticides and Cancer, Glyphosate and Gut Bugs.

A 2013 article at RodalesOrganicLife.com suggests the growing evidence against glyphosate, possibly the world’s most widely used herbicide: ‘Once called “safer than aspirin,” glyphosate’s reputation for safety isn’t holding up to the scrutiny of independent research. More and more non-industry-funded scientists are finding links between the chemical and all sorts of problems, including cell death, birth defects, miscarriage, low sperm counts, DNA damage, and more recently, destruction of gut bacteria.’

Researchers found that glyphosate residues on food interfere with certain enzymes, with the result that  “…glyphosate enhances the damaging effects of other food borne chemical residues and environmental toxins. Negative impact on the body is insidious and manifests slowly over time as inflammation damages cellular systems throughout the body.”

[That paper, published in 2013 the journal Entropy, is HERE.]
It suggests that glyphosate might be causing a lot of the health problems that have been associated with Western diets – including “obesity, diabetes, heart disease, depression, autism, infertility, cancer and Alzheimer’s disease.”

BAD FOR THE ENVIRONMENT AND MOST LIVING THINGS

Glyphosate is bad for most living things. Research by way of a review of literature published in December 2017 by Springer Publishing concluded:

“Glyphosate poses serious threat to multicellular organisms as well. Its toxicological effects have been traced from lower invertebrates to higher vertebrates. Effects have been observed in annelids (earthworms), arthropods (crustaceans and insects), mollusks, echinoderms, fish, reptiles, amphibians and birds.”

It damages the soil. How? It binds to the soil, and acts as a “chelating agent” – trapping elements like magnesium that plants need to grow and thus impoverishing the soil. Research also indicates it kills beneficial soil fungi while allowing dangerous ones to grow.  There’s a good article about that on the Million Trees website: Gyphosate (AKA Roundup) is damaging the soil  that discusses a New York Times article on the subject.

Most of SFRPD has continued to decrease use of glyphosate in 2017 – except for the Natural Resource Department (NRD, formerly Natural Areas Program – NAP). Here’s the comparison. 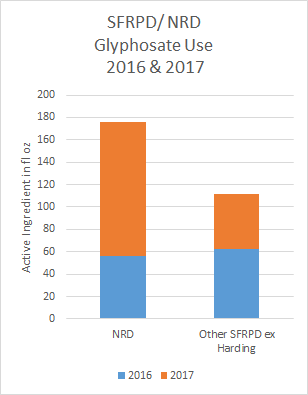 These graphs are in fluid ounces of active ingredient. The blue section is the use in 2016, and the orange section shows 2017.  NRD actually used slightly less glyphosate in 2016 than the rest of SFRPD (excluding Harding Golf Course, which is managed under an outside PGA contract). But in 2017, it used nearly 2 1/2 times as much.

Bear in mind that NRD accounts for a quarter of our park land in San Francisco.

Though we are glad SFRPD has been reducing use, we should be wary: Why Low Dose Pesticides are Still Hazards. Endocrine disruptors can act at very low dilutions, and in their case, the old adage that the “dose makes the poison” is not true.