In these times of so much bad news, we republish here a delightful post from the CoyoteYipps blog of wildlife photographer and coyote advocate Janet Kessler (with permission).

I watched a coyote forage in one of these bushes. When the coyote left, we went up to examine the berries which I had never seen before. I took a tiny taste, and my friend gulped down a couple to help us determine what they were: the flavor was bitter with a tad of sweet.

When I got home, I couldn’t find the plant on the internet, so I turned to my Nextdoor site and posed the question there. They indeed came up with what it was: Kangaroo apple, as it’s called in Australia, or poroporo, as it is called in New Zealand are native to those areas, but have been naturalized into the Bay Area and can be found throughout San Francisco. AND, we should not have eaten them as they are poisonous — they belong to the nightshade family! Yikes!

Once I had the name of the plant, I looked up more about it. Interestingly, it’s flowers are hermaphroditic (having both male and female organs). They are blue-violet or white in color, and a little over an inch in size. Flowers are followed by berries of about the same size. The berries, it turns out, are poisonous only while green — they become edible once they turn orange.  Whew!

The next day I went back to see if the coyote would appear again: I wasn’t sure it was eating the fruit or possibly foraging for snails or slugs on the plant. I wondered why a coyote might eat toxic material. As I watched, I saw that the coyote eating only the orange colored fruit! Maybe the green ones were unsavory and bitter as well as toxic? Smart coyote!

One argument we often hear is that “native plants” are better as habitat. It’s very seldom true. Most animals, birds, and insects adapt to available resources – and that includes, often, non-native plants. The example above is one; another is the dramatic anise swallowtail butterfly that depends on non-native fennel. San Francisco Forest Alliance stands for Inclusive Environmentalism,  opposing xenophobia and welcoming the species that will save our changing world. 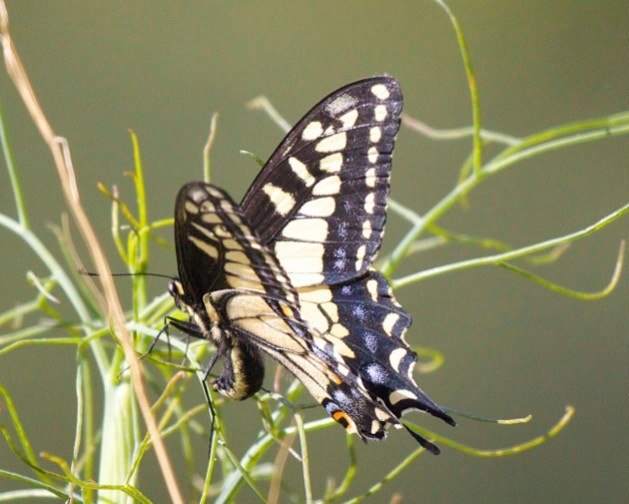 This entry was posted in wildlife and tagged coyotes, environment, habitat, nativism. Bookmark the permalink.