On a recent trip to Mount Davidson, a visitor saw that Garlon had been sprayed on oxalis.

The Natural Resources Department (NRD, formerly Natural Areas Program) is the most frequent user of pesticides in San Francisco Recreation and Parks Department (SFRPD).  It applied herbicides on Mt Davidson 8 times in 2016. Other SFRPD units have all but stopped using herbicides. 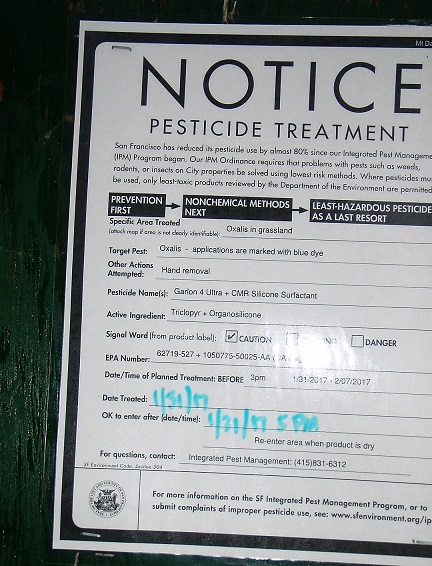 The Natural Resource Department (NRD, formerly Natural Areas Program or NAP), observed the SF Department of the Environment guideline to use blue dye with its herbicides (so people can see and avoid those areas). 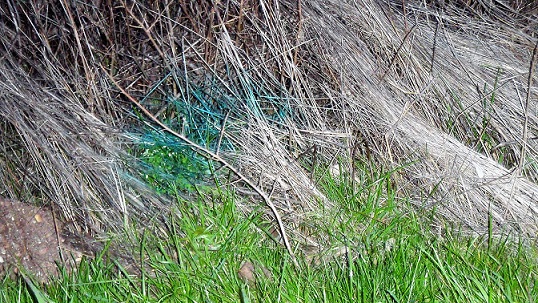 Unfortunately, they flouted the SF Environment guideline that says there should be no herbicides used within 15 feet of a trail. “Blue dye is right next to and on the trails…” said the visitor.

(Edited to Add: We subsequently learned that SFRPD got a special exemption to permit them to spray on the trail, and they were supposed to have blocked the trail to visitors.)

Here’s a picture of blue dye on the trail.

Garlon by the trail on Mt Davidson, San Francisco, Jan 2017

The SF Department of the Environment (SF Environment), which is responsible for the Integrated Pest Management guidelines, lists Garlon 4 Ultra as a Tier I chemical, Most Hazardous. Ever since we started following this issue, it’s been on the list with a bold, capitalized statement: HIGH PRIORITY TO FIND AN ALTERNATIVE.

Garlon is also supposed to be twenty times as toxic to women as to men. (See page 28 of this California Native Plant Society Presentation which discusses best management practices in herbicide use: Law_Johnson 2014 presentation toxicity )

An article on SaveSutro.com, based on a detailed study by the Marin Municipal Water Department, describes some of the issues with Garlon:

This highly toxic chemical is used by NRD against oxalis during its flowering season – in winter and spring. On Mount Davidson, they used it in February  and December 2016 as well.

It doesn’t make logical sense. Here’s our article on Five reasons it’s okay to love oxalis and stop poisoning it.

Meanwhile, another visitor sent us a series of pictures showing trees being felled at the southwest end of the forest. 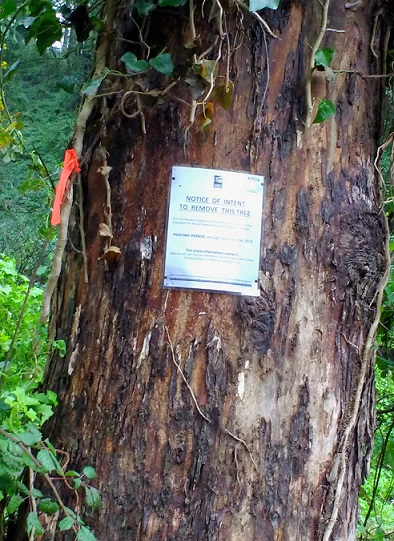