Here’s the story of the Mount Davidson Eagle Scout bench, from its sudden removal by the Natural Areas Program, to the silly lie included in the Environmental Impact Report on the Natural Resource Areas Management Plan.  The Natural Area Program’s disregard for the public is illustrated at every twist and turn along the way.

Once upon a time, there was a nice little bench on Mt. Davidson.  It was built by Boy Scouts.  It wasn’t much, but people liked it and it was well used. 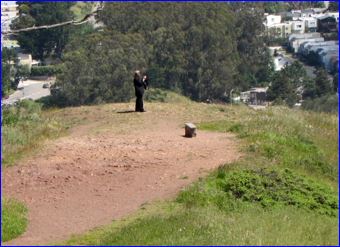 THIS IS THE BENCH THE SCOUTS BUILT

Then one day the bench disappeared.  Who were the vandals?

It turns out it was actually the work of our RPD Natural Areas Program.  When people complained they received this response from NAP management:

The bench that you’re referring to was installed by the Recreation and Park Natural Areas Program. It was installed a number of years ago on this site to take advantage of the views, beauty and serenity of the plateau. We monitored the use of the bench and it unfortunately became an attractive nuisance. The secluded location was a draw for night time drinking and smoking. Bottles were thrown down the hill slope and most often broke, causing a hazard for both animals and people. Secondly the bench became a draw for commercial dog walkers, at times with more than 12 dogs in the area at once. This activity resulted in trampling of this sensitive slope, disturbance of wildlife and the creation of trails around the bench. One of the trails remains in the grassland below the bench location. After consideration we concluded it was best to remove this bench.

Over the coming year we will evaluate the installation of benches city-wide. This will be done in correlation with a natural areas trail project . Due to the activities associated with this bench we unfortunately do not have intentions to re-install one on the lower plateau at Mount Davidson.

Sorry for the disappointment this may bring,

Why does NAP management take credit for installing this popular bench?  They had nothing to do with it.  Why did they remove it?  Because people liked it and it attracted them to this area of the park. Clearly the NAP does not want us in their Natural Areas. 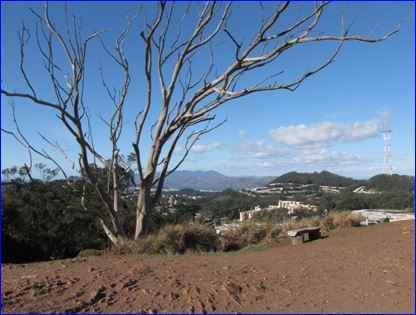 After much pressure, the NAP finally installed a replacement bench a bit higher up the mountain.  For some reason they sited it right under a dead tree.  In fact, it was a tree they had killed by girdling some years earlier.  Given the NAP’s zeal for removing even slightly hazardous trees along its “trail Improvement” projects, it seems especially odd they would site a popular amenity directly under this tree.

Can you guess what happened next?  The tree fell over right across the bench.  Thankfully no one was sitting there at the time.

In the photo below you can see where a wide ring of bark was cut away to kill the tree.

It appears when the facts don’t suit the writers of the EIR, they substitute other “facts.”

That brings us to today.  The final Environmental Impact Report for the Significant Natural Resource Areas Management Plan (SNRAMP) has been released.  In the section addressing public comments made during review of the draft EIR the bench makes another appearance. (page 4-340)  In response to questions raised by the public about the removal of benches from NAP areas, some specifically citing the Mt Davidson bench, the NAP offers the following response,

“These comments refer to prohibition benches and the removal of a bench at Mt. Davidson Park. In 2011, SFRPD removed a bench on the northern portion of Mt. Davidson because it was rotting and unsafe for sitting. In late 2012, SFRPD installed a replacement bench close to where the unsafe bench had been located.”

“rotting and unsafe for sitting”?.  That is a bold lie.  How many other items in the SNRAMP EIR are based on fabrications like this? (Quite a few)

Claiming the original was unsafe and installing a replacement right under a tree they purposefully killed – That is disturbingly ironic.

This little story is just the tip of the iceberg.

See the rest of the problems with the SNRAMP EIR at:
https://sfforest.files.wordpress.com/2016/12/arguments-against-certification-of-snramp-eir.pdf

4 Responses to Disturbing Story of the Mt Davidson Bench