The Natural Resources Department (NRD -formerly called the Natural Areas Program) is planning to cut down more than 15,000 trees in Pacifica’s Sharp Park, mostly on hillsides east of Highway 1. This is supposed to benefit the two species that live around there – the threatened red-legged frog and the endangered California garter snake. It will most likely threaten them still further.

THE LAKE OF THE RED-LEGGED FROG 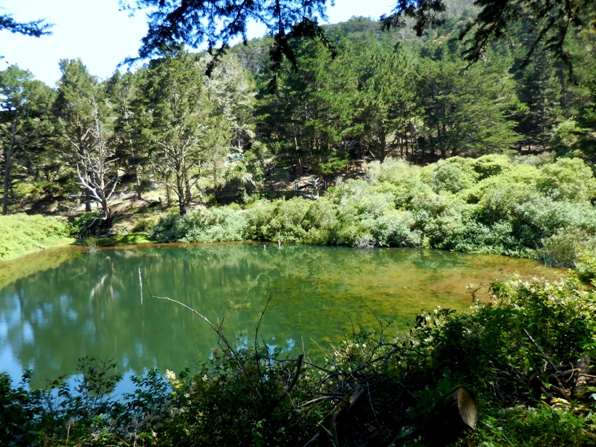 This lake is red-legged frog habitat. And it’s not just good for the endangered frog, and presumably the endangered snakes that preys on it. All kinds of other wildlife use it. Observers have seen everything from bobcats to quail to rabbits in the area.

The lake, which lies to the east of Highway 1 in Sharp Park, was made by damming a seasonal creek. On the left of the picture above, you can see the earthen dam covered with greenery. Now a naturalized pond, it was originally part of the irrigation system for the Sharp Park golf course, and was fed water through pipes and a cistern. Now the golf course gets its water elsewhere, the cistern has been filled in, and the pipes in disuse or gone.

This is where the old cistern was filled in. It’s invisible now under wildflowers and shrubs.

All the water in the lake now comes from the watershed created by the forested hills around.  Since this park lies within the fog belt, the tall trees catch the water and rain it down into the pond, even in summer. As a result, the pond has water through the year. (The photos here were taken in June last year. Everything was lush and green and there was no sign of any drought.)

So what happens when the trees are felled? We expect two adverse impacts on habitat.

Besides damaging the habitats of endangered species, the tree-cutting plan is environmentally damaging in many ways.

There’s more about the plan for Sharp Park HERE in an article we wrote last year. In the map below , the red percentages show the percentage of trees to be felled at each site. In most places, it’s 75% of the trees. (You can click on the map to make it larger.)

Imagine this hillside as a bald mountain with a few scraggly trees, brown and dry in summer. 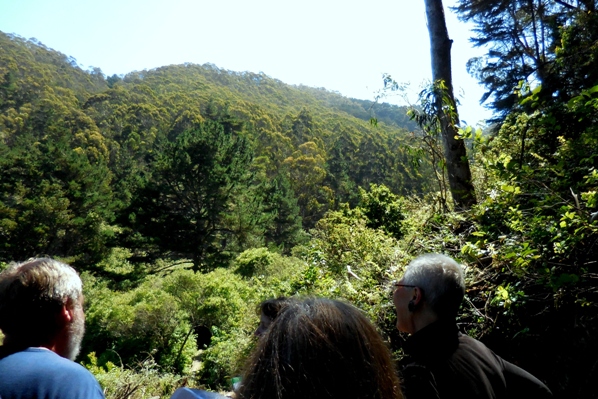 What we wrote then in conclusion:

Aside from the beauty of the place, and the undisturbed wildlife habitat that would both be destroyed, we think it is environmentally irresponsible. Eucalyptus, with its dense wood, its size, and its 400-500-year life-span, is particularly effective at sequestering carbon. In foggy areas, it captures moisture from the fog and drops it on the ground below, allowing for a dense damp understory that fights drought and resists fire. It cleans the air, especially fighting particulate pollution, by trapping particles on its leaves that eventually get washed onto the ground. It stabilizes hillsides with its intergrafted root system that functions like a living geotextile.  SNRAMP would require the use of large quantities of poisonous herbicides to prevent resprouting of the felled trees – herbicides that are likely get washed down the hillsides and into surface and ground water.

Pacifica actually has an ordinance prohibiting logging (removing more than 20 trees in a year). NRD’s answer to that is to see if the ordinance applies, and if it does, to try to get permission.