Did you know that Glen Canyon has Barn Owls (Tyto Alba) as well as our famous Great Horned Owls?!  Barn owls are much smaller than the cat-sized Great Horned Owls, weighing just over a pound and reaching about a foot in length. Their wingspan reaches over a yard.

Compare this to our Great Horned Owls whoooo [misspelling intended] can reach a length of 25 inches, weigh anywhere from two to six pounds, and have a wingspan of 5 feet. Great Horned Owls are considered “true” owls whereas Barn Owls are classed differently as Tytonidae. 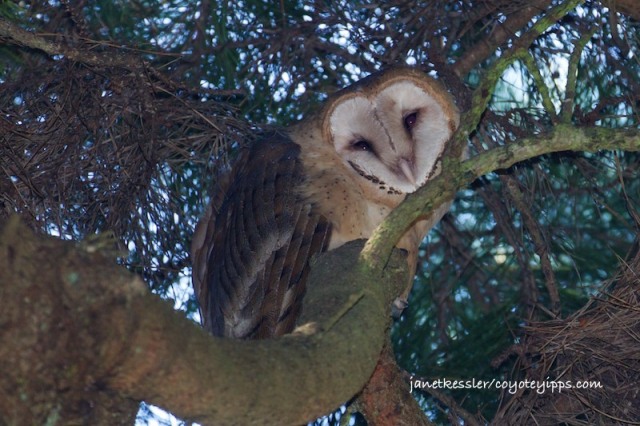 Barn Owl (Tyto Alba). Their huge eyes don’t move in their sockets like ours do, so an owl must move it’s entire head, rather than just its eyes, to see things clearly. This owl is twisting its head to examine me. Their eyes are no good during the too-bright-light-for-them-during-daylight, so it’s also squinting.

Although they usually glide and “moth their wings” without a trace of sound, Barn Owls can also be quite noisy, as when they really bat their wings loudly on purpose to scare off an intruder, or when they are vocalizing. It is because of their noise that I recently ran into some. I was really surprised when the squawks I heard turned out not to be those of a nearby bluejay warning off the owls. No, it was the owls themselves protecting a youngster! Barn owls, it turns out, don’t “whoo, whoo, whoot”, as we all might expect, as the Great Horned Owls do. Instead, they screech in a bunch of different ways. I made a recording of the sounds:

Press here for AUDIO: Notice there are a couple of distant coyote barks at the 34-39 second marker, and the owls get really intense at the 2:54 marker. The recording lasts 3:24 minutes.

For years I’d seen one at dawn or dusk, gliding and swooping in its silveriness, ever so silently through the dark. You could only see them as you do the bats — against the lighter night sky before total darkness set in in the evening, or before the light of day set in at dawn, or as a shimmer against the darker trees at these twilight hours.

Once, I lay down on the ground and was able to capture, in a photo, one of these owls as it “mothed” right above me, from what seemed like five feet away, examining me out of curiosity — no, it was not courting me! It was because that owl was against the lighter sky that the camera was able to capture its image — it was actually dark outside.

They are nocturnal, so if you want to see them you should begin your walk in the dark — and keep your eyes on the sky above the tree-line: you may see one floating silently by before returning to its roost at dawn, or as it begins its “day” hunting at dusk. I’ve Googled some interesting information which I’ve added below.

Barn Owl “moths” over me

Territoriality. Barn Owls defend the area around their nests, but they don’t defend the area where they hunt from others of their same species — they share. In other words, more than one pair of Barn Owls may hunt on the same fields.

In the summer, the Barn Owls’ home hunting ranges are a little over a square mile; in the winter they can be many times larger. If food is extremely scarce, both of these owl species might move out of their established territories, but there is no annual migration and they maintain their territories for life.

Nesting. I found out that most Barn Owls mate for life — they are monogamous, as are Great Horned Owls — though there have been reports that some males have had several female mates at the same time. And Barn Owls tend to use the same nest site year after year. One of their courting displays is hovering in front of the female in a “moth-like fashion” — Oh, I experienced this several years ago! Chicks usually start flying at 9-10 weeks and begin leaving the nest for good at about 11-12 weeks. All will probably be gone by 14 wks.

If there is nesting in July, as is the case with this find of mine, it’s usually a second clutch for the mated pair. About 10% of barn owls reproduce two times a year — and some even produce three clutches in a year! And, although the breeding season is considered from March to August — having expanded due to climate change from an original breeding season which was almost always in May — they, in fact, can produce youngsters at any time of the year.

They lay as many as 6 eggs, but more often than not, only about 4 of them hatch. The eggs are laid asynchronously, every 2-3 days and they hatch in the order in which they were laid (sounds like a business telephone answering service, doesn’t it?!). So chicks from the same clutch can actually vary up to about 21 days in their ages. They don’t “build” nests, but find places to lay their eggs which they line with their pellets.

Poop. Pellets are actually excrement regurgitated through the mouth. Owls swallow their prey whole, but they don’t digest the bones and fur. The parts of the prey that actually pass through the digestive tract and out of their rumps are excreted as a softish, whitish “guano” — like that of all birds. Guano can often be found dripping down the tree trunks on which they perch.

However, in owls the larger, indigestible parts of the prey, including bones and fur, are kept in their gizzard for a couple of hours as a pellet which then travels back up into the Proventriculus (the first part of the stomach) where it remains for ten hours before being regurgitated. This stored pellet actually blocks the owl’s digestive system so that new prey cannot be swallowed until the pellet is ejected. Twice a day these are spat-up, or regurgitated out of their mouths, as “pellets”. These pellets basically look like the poop of other animals except that they are oval-shaped and not long. [see Digestion in Owls]

Hunting. All owls’ eyesight is pretty superb — they hunt at night [see “Coyote Night Vision”]. In addition, the ability of Barn Owls to capture prey by sound is the best of any animal that has ever been tested. Their satellite-dish shaped faces helps with this. They eat mostly small mammals such as rats, mice, voles, gophers. Also bats. They don’t eat squirrels so much because they are less active at night. They also eat some song birds. 91% of barn owls, post-mortem, are found to contain rat poison. The most long-lived Barn Owl ever recorded was 15 years old.

Poisons. Everyone, please don’t use poisons to eradicate rats, and please ask your neighbors to do the same. Rat poison is a horrible and slow death for rats, causing them to bleed from the inside out, and causing them to become disoriented and slow. This is why owls catch them. But worse, the poison actually travels up the food chain to these owls. Several years ago I sent in two dead barn owls for toxicity tests: they were found to have huge amounts of rat poisons laced throughout their bodies. We’ve also had a number of our Great Horned Owls killed by rat poisoning: One, this year, we guessed, was the mother of owlets who then never made it to adulthood.

[Photo and Story by Janet Kessler]

This entry was posted in "Natural" Areas Program, OTHER, wildlife. Bookmark the permalink.