[Edited to Add on 26th April 2016: The website of opponents to Prop B keeps a running tally of groups opposing the Proposition. HERE is the link:  http://www.sfvotenopropositionb.info/  ]

The San Francisco Forest Alliance opposes Proposition B.  Initially, Proposition B, Supervisor Mark Farrell’s Charter Amendment, looked like a good idea.  The thinking was that it would guarantee funding to San Francisco Recreation & Parks Department (SFRPD) for improved maintenance, and focus on under-served parks. There’s a big push on right now to sell this idea to potential voters. But (and it’s a very big but) the way it’s written essentially hands the money to SFRPD with no meaningful restrictions on how the money will be spent.

The text of the amendment, as a PDF,  is HERE: Prop B text PDF

The short description of the measure from the ballot simplification committee is HERE: PropB-OpenSpaceFund-Digest PDF 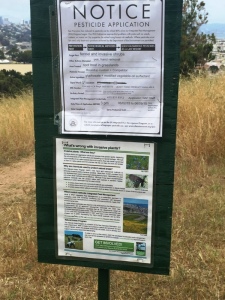 Proposition B would set aside money from the General Fund for the Parks Department. It doesn’t raise extra money, it just makes it compulsory to set aside part of the city’s budget and give it to the SFRPD to spend how they will. What the money is actually used for would be entirely at the discretion of the General Manager of SFRPD, who is selected by the Mayor. SFRPD is nominally overseen by the Recreation and Parks Commission, but the Commission, also appointed by the Mayor, nearly always supports the General Manager. The result is a Department Manager and a Commission that align with each other and the Office of the Mayor.

Proposition B removes the Board of Supervisors from the Parks’ budget process. During the budget process, the public gets to weigh in at hearings and with their Supervisor on their parks and what is needed. (At present, the Board can influence SFRPD because the Board decides how much funding the Department gets from the General Fund each year.) Proposition B mandates that funding go to SFRPD,  so it removes that control of public money from the public and from our elected Supervisors and gives it to political appointees and bureaucrats.

Though Proposition B is being promoted as favoring maintenance and social justice, there’s no mechanism in the Amendment by which to enforce either of those goals. The BOS is allowed to comment on SFRPD plans and goals, but it will have no authority to change them.

There is no specificity in Proposition B as to how this money will be spent. If some future General Manager decided what he really needed to do was to increase middle management to privatize parks and clubhouses, boost managerial salaries to compete with Silicon Valley, hire contractors to douse the parks in herbicides, or make our parks into elaborate and expensive showpieces that end up excluding the neighborhood residents – as happened with the Mission Playground – there would be nothing outside of the Department to stop him. The Mayor could select a different General Manager, but again, all of the power is exclusively in the hands of the Office of the Mayor.

It’s for 30 years. Mayor Ed Lee and SFRPD General Manager Phil Ginsburg will be in charge for only a small portion of the amendment’s life. The people who will be running things at the end of this period are probably in kindergarten right now.

Prop B guarantees funding for the Natural Areas Program.  Here’s the language:

“The annual budget for allocation of the Fund that is adopted by the Commission and submitted by the Mayor to the Board of Supervisors shall  include: 1. Allocations for after-school recreation programs, urban forestry, community gardens, volunteer programs, and a significant natural areas management program in the amounts allocated for each of those programs from the Park and Open Space Fund in the Department’s fiscal year 2015-2016 budget, to the extent that such programs are not so funded in the Department’s operating budget or in the budget of another City department.”

This means that when they decide to fell 18,500 trees, when they want to close 9 miles of trail and many dog-play areas, when they decide to use toxic chemicals to eradicate non-native plants they dislike – they’ll have the money and can go right ahead. Neighbors who object will have to fight them park by park, action by action.

(The actual Significant Natural Resource Areas Management Plan (SNRAMP) is on hold because the Environmental Impact Report has not even been published and  approved yet. That’s because the Draft received so many negative comments they needed years to respond. Though SFRPD appears to be implementing much of what’s in that Plan already.)

If SFRPD gets more money from the General Fund, someone else gets less. Proposition B would impact funding for other City departments. By mandating money for SFRPD, it reduces the amount of money available for other uses. The Board of Supervisors  wouldn’t be able to use the money to meet emergency needs for the City and for other City enterprise departments – not even agencies that provide social services and other public benefits. They will have to scramble for allocations from the remaining discretionary General Fund . Soon every department will need set-asides, and our elected officials will have a declining say in how public money is spent.

It’s also going to be a lot of money – as much as $4.56 billion (yes, billion with a B) over the thirty years. According to an analysis provided to us, here’s how it works:

2. Starting 2026, the $3 million stops. Instead, the addition to the baseline will depend on the city’s revenue growth. It will grow the baseline by the same percentage as the increase or decrease in city revenues. So if the revenues grow 2%, so will the baseline.

Over 30 years, this would total an estimated $4.56 billion.  (You can see the calculations – provided to us by an analyst opposed to Prop B – HERE: RPD Funding 2016 Charter Amendment – with GF 2 percent +totals now )

SFRPD also gets income from its fees, leases, and permits. That funding would continue on top of all of the funding guaranteed by Proposition B.

Opposing Proposition B will not deprive SFRPD of any funding. They can still make a case for their needs during the budget process on an equal footing with every other department to the people and to the Supervisors.

So – in brief: What’s wrong with Prop B is that it sets aside a sizeable, untouchable slush fund with no real accountability and no control from outside of SFPRD – and it’s one that will operate long after the professional life-times of those who are setting it up.

[Edited to Add: Some minor edits were made after publication to remove typos and clarify language.]