This is one of our park visitor posts, written by a neighbor of McLaren Park. The Natural Areas Program targets over 800 trees in McLaren Park for destruction.

My San Francisco neighborhood is surrounded on three sides by freeways. Interstates 101 and 280 are busy spewing exhaust all day and most of the night. Breezes and fog from the ocean help dissipate some of the smog, but on windless days the air hangs heavy and dense. The only thing saving our air quality is the trees.

The Excelsior is not your typical rich San Francisco neighborhood. It is mostly families and working class folks. The tech buses have not found their way down our streets and our main retail corridor is filled with nail salons, dollar stores, pot clubs, and boarded up storefronts. Despite having nearly 40,000 residents, sometimes it feels like we are a forgotten neighborhood. Tourist maps often omit the entire south end of San Francisco and visitors have been known to ask whether they are still in The City.

The wealthier a neighborhood, the more trees it has. Rich people have trees, poor people get cement. This is especially true in the Excelsior, Visitacion Valley, and the Portola, where the single-family homes are modest and many front yards are paved over and littered with old cars. Our sidewalks are “tree poor” compared to wealthy Noe Valley and posh Pacific Heights. But the working class neighborhoods on the southeast side of San Francisco have one thing going for them : McLaren Park. 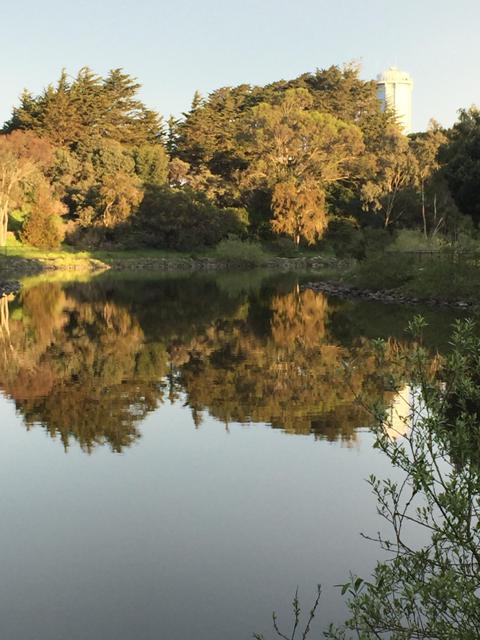 McLaren Park is the second biggest park in San Francisco, after Golden Gate Park. It is as wild and isolated as Golden Gate Park is manicured and visited. It is possible to hike miles of trails without seeing another person. I have seen foxes, coyotes, red-tail hawks, and great horned owls on my daily walks. In many parts of the park birdsong drowns out the constant drone of the freeways and the tree canopy blocks the cityscape. McLaren is our little piece of paradise in this urban corner of the City.

Recently I found out that San Francisco’s Rec and Park Department has big plans for this urban oasis: the Natural Areas Program. The plan calls for cutting down many hundreds of healthy trees in an attempt to recreate the native scrubland that existed in the 1700’s. The trees slated for removal are not only eucalyptus, but mature and healthy Monterey Pine and Cypress, among others. Millions of our tax dollars have already been spent on this boondoggle, while maintenance in our park is practically nonexistent.

The “Natural Areas Plan” claims about ⅓ of San Francisco’s city parks, but Rec and Park’s biggest conquest yet may be McLaren Park. Could it be because the southeast corner of the city is the least rich, the least white, and the least likely to oppose this butchering? Almost 50% of the population in adjacent neighborhoods are foreign-born and speak english as a second language. People on this side of town don’t have the same political clout and connections as those living in wealthier neighborhoods. Even chopping down dying trees in other parts of the city creates a community uproar. When it comes to environmental justice, our hood is just not rich enough and not white enough.

Trees clean the air, absorb traffic noise, and provide respite from our hectic city lives. As the Bay Area becomes more populated, we all need more access to public green space. John McLaren created the park in 1927 in order to save the area from development. Now we have to save it from clearcutting.

McLaren was originally mostly coastal shrubland. Three-quarters of lush Golden Gate Park was originally sand dunes. Sutro Forest was desolate, sandy and wind whipped. Whether you agree with “native plant restoration”, the bigger question here is, should a beautiful yet neglected city park surrounded by freeways and adjacent to tree-poor neighborhoods be slated for such a project?

SF Rec and Park maintain that they just don’t have enough money to pay for proper garbage cans and trash pick ups, trail and tree maintenance, repairing crumbling playgrounds, and other upgrades that McLaren desperately needs. But the department apparently has enough money for spraying cancer-causing herbicides like glyphosate (Roundup), cutting down healthy trees, and fencing off large parts of our park to visitors. The Natural Areas Program may have a different budget category within the Rec and Park department, but it all comes from our tax money.

Our city and our neighborhoods need more trees, not less. San Francisco has the smallest tree canopy of any major U.S. city. Poor children and children who live near freeways have higher rates of asthma, and studies show that a dense urban tree canopy can decrease these high rates of childhood asthma. Children in the southeastern part of San Francisco have the highest asthma rates in the city, and all the residents this side of town on experience high rates of air pollution.

San Francisco Has the Least Canopy Cover of any Major US City (data source: socketsite.org)

Tree-filled parks don’t just beautify our neighborhoods, they also improve our psychological well-being. Green urban neighborhoods with plenty of trees actually improve our health, according to several recent studies. Our 49 square-mile city is the second densest in the country, right behind New York. Attempting to return large swaths of our urban parks into the treeless landscape that they once were doesn’t make sense in present day San Francisco. Urban trees do more than just improve air quality; they improve our quality of life. Living in a city can be stressful, hectic, and cramped. We all need access to open, public, forested green space.