Did “Round Up” Kill My Dog? (and why you should care)

This article by Dr. Victoria Hamman was published recently in “The Natural Newsletter.” Dr Hamman is a licensed naturopathic doctor who lives in San Francisco. It’s republished here by permission with minor edits and added pictures. 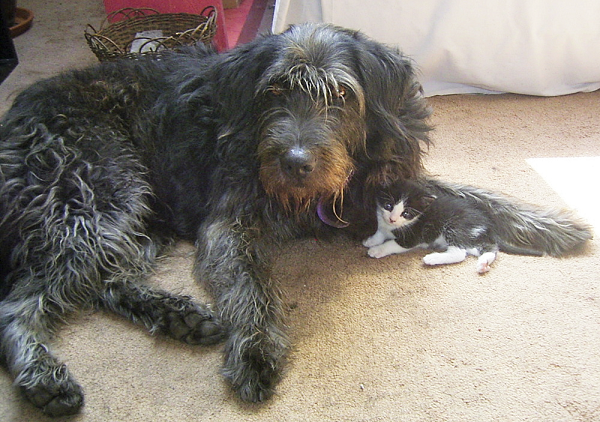 Most of you knew my dog Barack. He was my office companion, always quick with the announcing bark and wagging tail when folks arrived at the gate. Barack healed many a person of their fear of dogs with his gentle way. When someone was upset, he’d come over and lie at their feet. He loved people – especially children. I never had to worry about Barack, even when toddlers hung onto his fur.

Barack died on Sept 18 from a horrific oral cancer that killed him less than 4 months after the diagnosis. I’ve had dogs my entire 58 years, been around many other people’s dogs and worked as a vet assistant during my college years, and never have I seen an cancer like this.

I accept that death sometimes arrives sooner than expected. Many dogs have died of cancer at younger ages than Barack. People die too “before their time,” for reasons that medicine all too often cannot explain. Veterinarians told me that sadly, these types of oral and nasal cancers are on the increase in San Francisco dogs, but they had no idea what was causing them.

Then it came to my attention that the City of San Francisco sprays the herbicide “Round Up” (glyphosate) liberally in parks and dog parks. And then California became the first state to demand that Monsanto place a “black box” warning on its product that Round Up “Probably Causes Cancer.” Recently I noted that the SF Recreation and Parks Dept. posted notices all around a preschool in Glen Park warning that they had sprayed Round Up. Children who crawl around on the ground share an increased risk of exposure with dogs (and other animals) who have their noses and mouths directly in the sprayed vegetation.

Barack always had his nose in the Round Up-sprayed grass and, being a ball retriever, he was constantly picking up some of that herbicide on his ball into his mouth: the mouth that developed cancer. So I started doing some research on this herbicide – the biggest-selling herbicide in the world. And what I learned alarmed and infuriated me.

A recent study by eminent oncologists Dr. Lennart Hardell and Dr. Mikael Eriksson of Sweden has revealed clear links between glyphosate) and non-Hodgkins lymphoma – a common and often deadly cancer in humans. There has been convincing evidence for decades that Round Up causes a wide variety of cancers. 30 years ago the Environmental Protection Agency warned that Round Up might cause cancer.

Round Up indiscriminately kills a wide variety of “weeds.” Now, due to Monsanto’s bioengineering, 71% of genetically engineered( GE) crops are designed to be resistant to Round Up. This means that the crops are not killed by the herbicide, thus farmers are spraying 3X as much Round Up as they used to in an attempt to kill the weeds (which themselves are becoming increasingly resistant.) GEs dramatically increase the amount of pesticides sprayed. Round up residues on GE soybeans have increased from 6 parts per million (ppm) in 2005 to 20 ppm now.
Monsanto now makes seeds for soy, corn, canola, cotton, alfalfa and beets that are “Round Up Resistant”. Round up is a $6 billion dollar per year product. A large portion of the GE soy and corn become animal feed where the chemical accumulates in the fat of the cows and pigs that eat it, and the human consumer is exposed to an even bigger dose.

There is an area called “The Soy Republic” in Latin America – 125 million acres in Argentina, Brazil, Uruguay and Paraguay devoted to GE soy production. A National University of Argentina epidemiological study of 65,000 people revealed breast, prostate and lung cancer rates 2-4 times higher than the national average. In some heavily sprayed farming villages, 31% of residents have family members with cancer (compared to 3% in ranching villages.) A 2009 study of American children with brain cancer showed that if either parent was exposed to Round Up during the 2 years before the child’s birth, the risk of that child having brain cancer doubled.

A study done in France (published in 2012 but silenced until it was re-published in 2014,) showed a doubled increase in breast tumors in people exposed to Round Up. The tumors were also more aggressive. There was also an increase in cancer of the pituitary gland. Furthermore, all of the animal studies showing high cancer and death rates were done with much lower doses proportionately than what we are being exposed to today. We are being exposed to Round Up residue 500-4000 times higher than the dose that has been proven to cause cancer. As if that’s not enough, a group of international scientists reported that Round Up leads to antibiotic resistance in the most common disease-causing bacteria.

Did Round Up kill Barack? I’ll never know the answer to that question. But the evidence is clear that chemical pesticides/herbicides are killing untold numbers of human beings. What can you do to stop the carnage?
1.) Never spray chemical pesticides on your own plants and never use chemicals to kill pests such as rats, mice or cockroaches. There are plenty of natural alternatives. (google organic gardening.) Talk to your friends and neighbors; if you live in a complex, talk to the management. Protest the spraying of carcinogenic chemicals anywhere near you.
2.) Always buy organic produce, meat, eggs, milk and cheese. Support organic farmers.
3.) Contact your local government agencies and demand that they use non-toxic alternatives to chemical pesticides/herbicides in your area. 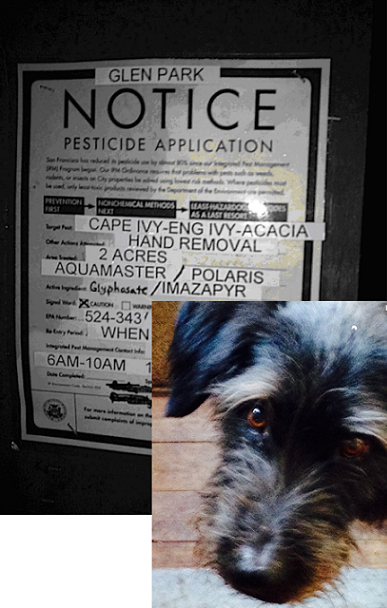 Thank you for getting involved. It will not be an easy road; Monsanto is one of the biggest companies in the world and heavily supported by the U.S. Govt. But it is a battle that we must fight, for the sake of our own health and those we love. To quote Margaret Meade:

“Never believe that a few caring people can’t change the world. For indeed, that’s all who ever have.”

3 Responses to Did “Round Up” Kill My Dog? (and why you should care)