McLaren Park walk: Looking at the Future, Minus 800 Trees

[Apologies: Some glitch on the website caused Draft versions of this post to be published. Please ignore the earlier posts.]

On a Saturday in late August 2015,  the San Francisco Forest Alliance organized a walk in John McLaren Park – Natural Areas for a  group of our supporters and other interested people. It wasn’t just about a walk through this fascinating park on San Francisco’s southern edge – we all wanted to understand what was planned for its future. 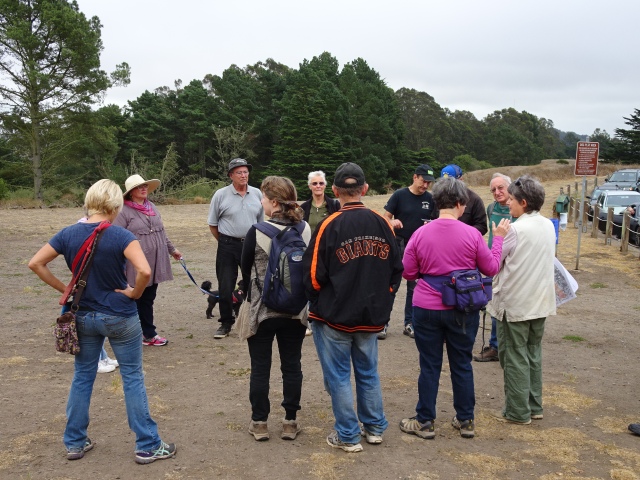 The group wanted to learn about the San Francisco Recreation and Parks Department (“SFRPD”) plans for the Park:  elimination of 8.3 acres of dog play areas; the removal of 809 trees ( eucalyptus, Monterey cypress and Monterey pine);  and using herbicides to poison the  “non-native, invasive” vegetation. The idea is to expand native plants – mainly scrub – in the Park.

In McLaren Park, nearly all the areas that are not actually built up or used for sports, are designated as “Natural Areas.”The Natural Area covers 165.3 acres and is made up of grassland, scrub, and blue gum eucalyptus trees. These are subject to the “Significant Natural Resource Areas Management Plan” – or SNRAMP (pronounced Sin-Ramp). 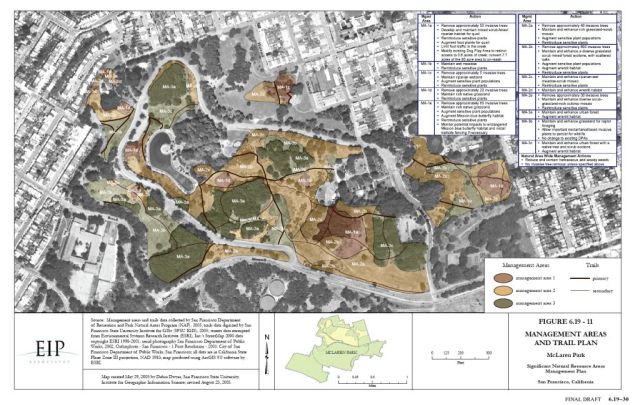 All the colored areas in the map above – brown, tan, and olive – are subject to SNRAMP. 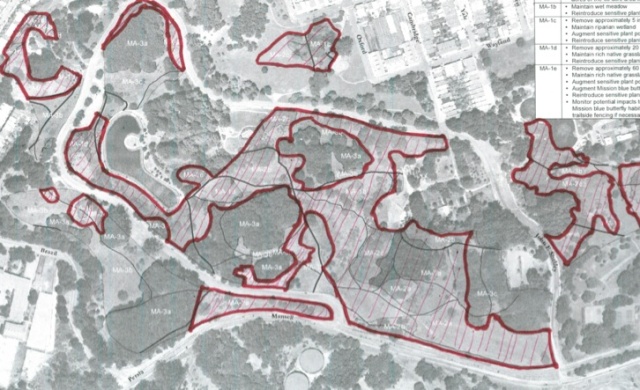 Outlined areas (with diagonal lines) will be “restored.”  Trees and shrubs are to be removed. Native species will be planted.

The walk was led by Tom Borden, bicyclist, and Ren Volpe, long-time dog walker both of whom know the park and RPD’s plans for McLaren. 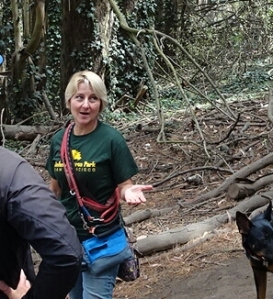 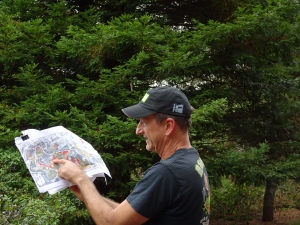 THE TREES THAT ARE GREEN NOW

So with SNRAMP maps in hand the group walked 3+ miles around the Park to see the trees that the city wants to remove. According to the SNRAMP document for McLaren Park:    “… Tree removal at McLaren Park is planned mostly for individual trees or small groups of trees within grasslands. …”

We started the walk parallel to the Mansell St corridor, where the city plans to change 4 lanes of traffic into 2 lanes for vehicles and 2 lanes for pedestrians and bikes.

We believe the city will remove these trees along Mansell.  See link to the City’s plans here. 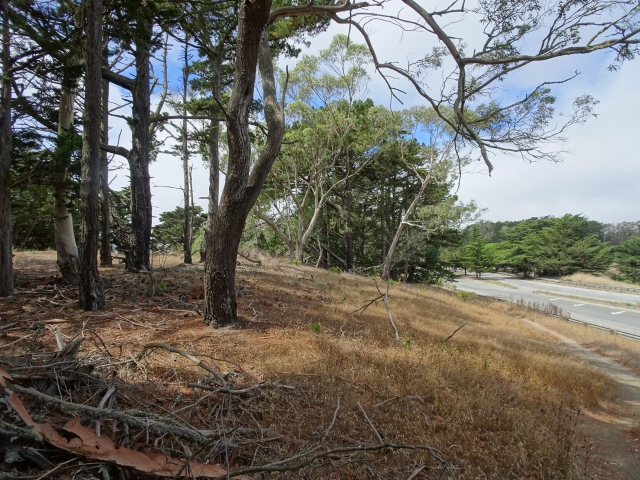 These other trees will likely be cut in this area along Mansell: 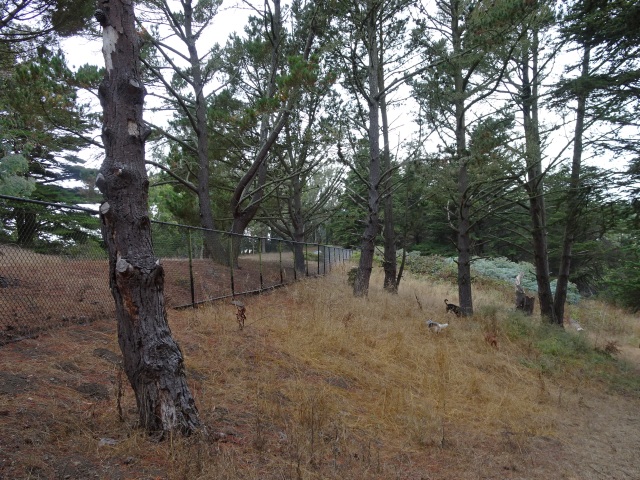 “... In the area downslope of Mansell Street, near the water tanks, the overall plan is to remove enough trees to preserve the grasslands and allow coastal scrub and oak woodland communities to become established. This would involve thinning the stand, which would leave the edges intact and would not result in a substantial change in ground‐level wind hazards and windthrow.”

We walked along the trail to the Upper Reservoir and saw where the removal of “invasive” trees is planned and the reintroduction of native plants will be undertaken. 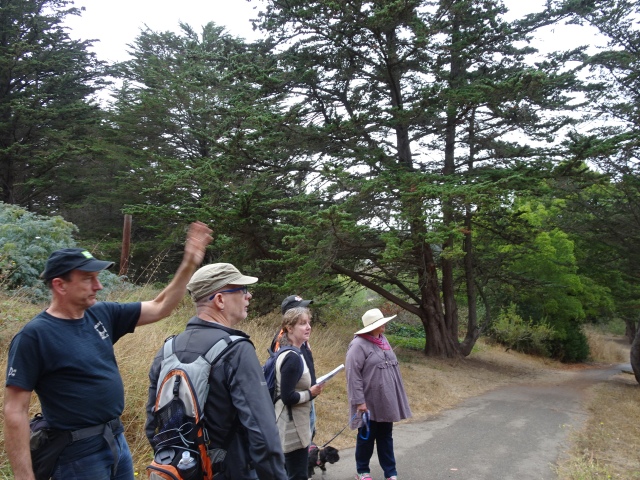 According to the SNRAMP document for McLaren Park: “… in some locations, trees would be replaced by native scrub or grassland species, which would open up views that are currently blocked by trees….”

We diverted our walk to take in the magnificent views from this part of the Park.  The views from the Water Tower provided us with a 270 degree view looking west and north to the downtown skyline: 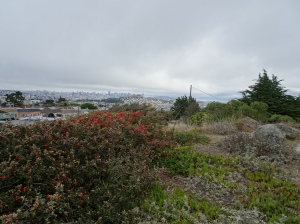 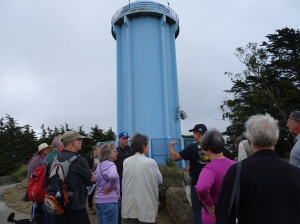 We walked along the Philosophers Way trail where Tom noted that trees along the sides of John Shelly Drive will be removed. This is presumably to open up to yet more views of the downtown skyline  – and to the wind. 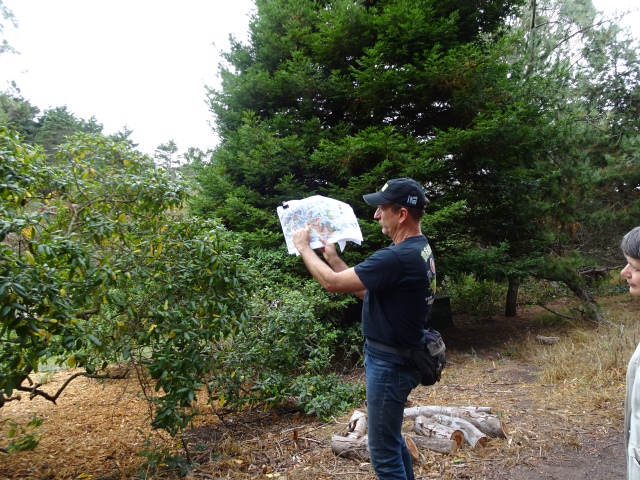 At the east end of the Redwood Grove and picnic area, Tom shows which trees are likely to be removed

According to the SNRAMP document for McLaren Park: “… DPAs [Dog Play Areas – off leash] would be reduced by 14%. The existing DPAs at this park are 61.7 acres…”

Our walk continued to the open grassland area  south of the Jerry Garcia Amphitheater and parallel to Mansell Street.  This photo show where grasslands will created by cutting down trees, and will be closed to people (and dogs). 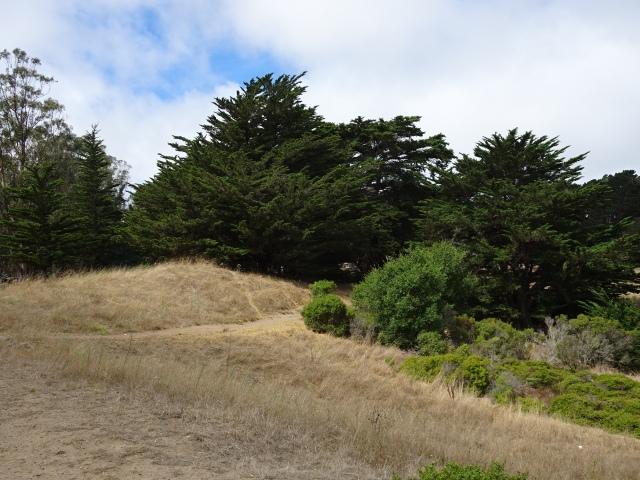 Grassland, now open as a dog play area, will be restricted use and probably fenced off

More dog walkers will be coming to McLaren Park when the GGNRA clamps down on dog access in areas controlled by the National Park system (the Presidio, Fort Funston, etc).  This will force more dog walkers into an ever smaller area. It’ll be smaller still if NAP further restricts the existing boundaries that NAP is planning for the off leash dog area (now within the John Shelley Drive loop) – which is entirely possible.

Tom reminded us that the SF Urban Riders and McLaren Bike Masters had donated thousands of hours for trail-building in McLaren Park – and then were shut out of the trails they’d helped to build.  (We wrote about that HERE.)

Our tour included the grasslands area that looks down to Visitacion Valley and the Gleneagles Golf Course. We were informed that trails have been closed to bicycles where previously biking was allowed. 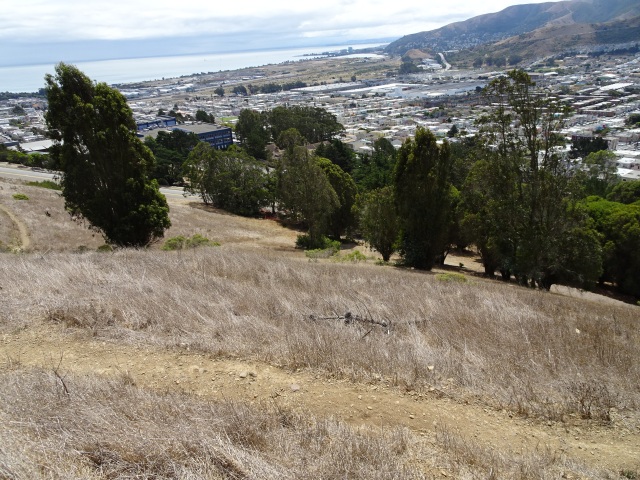 Looking down to Visitacion Valley and the Gleneagles Golf Course 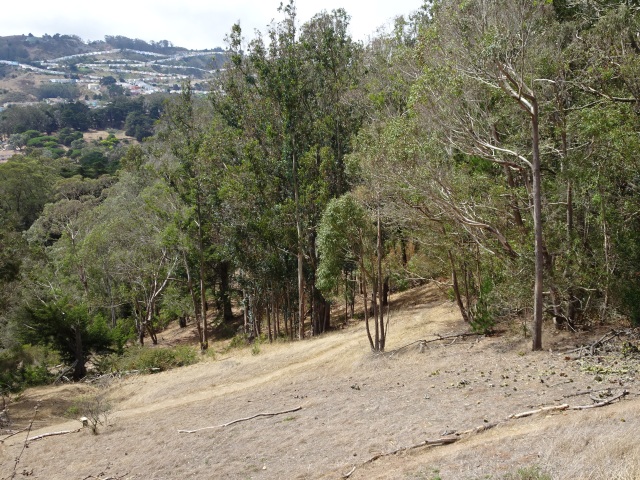 In the area south of Mansell Street, near the 2 water tanks, NAP plans to remove enough trees to allow establishment of a coastal scrub community. That means many of the trees in the picture above will be removed.

RUINING THE AMBIANCE AND ECOSYSTEM SERVICES

Local residents of San Francisco (people, bicyclists, dogs and wildlife) get enormous benefits from the beauty of McLaren Park.  It’s a  welcome respite for a very urban population, surrounded on all sides by freeways and boulevards. Local residents come here to enjoy the serenity and beauty that is just a few minutes from their homes.  A lot of that ambiance will be taken away when the City removes hundreds of trees.

It’s not just beauty. The trees in McLaren Park provide valuable ecosystem services. They fight climate change by sequestering carbon; and mature trees absorb more carbon than smaller young ones. They help fight urban pollution by trapping particles on their leaves, keeping them out of the air and our lungs. It cleans the air, especially fighting particulate pollution, by trapping particles on its leaves that eventually get washed onto the ground. They regulate water run-off and reduce the load on our sewer system.

In San Francisco, we have few wildland fires – and when we do, they’re grass fires. When the fog rolls in over the trees of McLaren Park, moisture drops on the ground, allowing for a dense damp understory that fights drought and resists fire. Trees  provide wind breaks, thus reducing the impact of wind on surrounding neighborhoods, and also reducing fire hazard.

TREES ARE GOOD FOR OUR HEALTH

Trees are good for our health. A New Yorker article linked here references a recent study that shows that ten additional street trees on a city block had the same health impact as giving each household $10,000 – or making all the adults seven years younger. Other studies have shown trees improve mental health, reduce stress, and aid healing.

SNRAMP is bad for health. Aside from blocking opportunities for outdoor exercise and recreation, it would require the use of large quantities of poisonous herbicides to prevent resprouting of the felled trees – herbicides that are likely get washed down the hillsides and into surface and ground water.

The City plans to remove 809 trees in this park since they are labelled “invasive”.  We strongly oppose this action.   Aside from the beauty of the Park, and the undisturbed wildlife habitat that would both be destroyed, we think it is environmentally irresponsible. Trees sequester carbon; eucalyptus, with its dense wood, its size, and its 400-500-year life-span, is particularly effective.

MORE WALKS, AND STAYING IN TOUCH

We plan to organize more such small-group walks through beautiful areas that will be impacted by SNRAMP.  They are always free, and no donations are expected. They’re guided by people who know the place well.  (HERE is a post about our recent visit to Sharp Park in Pacifica.) If you would like to know about the planned walks, as well as get updates about issues of trees and access restrictions, please stay in touch. We encourage you to enter your email address at the top right (“sign me up”) in order to receive our updates directly to your email.

If you’re on Facebook, please “Like” our page. https://www.facebook.com/ForestAlliance  We currently have 475 “likes.” Help us to take it over 500!

Let us know how we can be more effective and inclusive  at this email address: SFForestNews@gmail.com

2 Responses to McLaren Park walk: Looking at the Future, Minus 800 Trees