Can We Save These San Francisco Trees?

There are plans under way to cut down hundreds of street trees along some of San Francisco’s main thoroughfares. Generally, these plans get little publicity until the trees are posted with 30-day notices (these are the notices that inform neighbors that the trees are to be cut down). Neighbors are often shocked and dismayed at these plans. Though the notices usually provide a contact to protest the removal of the trees,  by that point it’s an uphill battle to save the trees.

It can be done: Consider the saved trees at Fisherman’s Wharf, and next time you visit there, consider how bare the road and brick walls would be without the trees! But it takes mobilization, determination, speaking up, persistence and luck.

San Francisco’s tree canopy is already inadequate at 13.7%, as against an ideal of 25%.  Street trees are enormously valuable to the community. They reduce pollution by trapping particulates in the air and thus keep them out of our lungs. They provide habitat for birds and butterflies like the Western Tiger Swallowtail that breeds in our London Plane Trees. They sequester carbon and thus fight climate change. They absorb sound and thus reduce noise pollution. They reduce storm water runoff. (Here’s a link to an article discussing all the benefits of urban trees.)

They have also have very significant health benefits. A recent article in the New Yorker mentioned research that quantified how much. The article noted that ten mature street trees per block was the equivalent of giving every household on that block $10,000:

“After controlling for income, education, and age, Berman and his colleagues showed that an additional ten trees on a given block corresponded to a one-per-cent increase in how healthy nearby residents felt. “To get an equivalent increase with money, you’d have to give each household in that neighborhood ten thousand dollars—or make people seven years younger,” Berman told me.”

Removing mature trees and planting saplings instead doesn’t provide the same benefits. It takes decades for the replacements to grow to the same maturity – and  meanwhile, all the benefits to environment, health, and habitat are accordingly reduced.

We would also point out that urban trees (or any trees) are seldom perfect. They grow in challenging conditions. Often, the justification for removing trees is that they are not in “good” shape. We would point out that unless a tree is actually hazardous, the standard should not be perfection, but that it is “good enough” to survive in the location to which it has adapted.

If you wish to fight to save these trees, there are two hearings coming up shortly. They will be held in Room 416 at San Francisco’s City Hall. [Edited to Add: If you cannot attend, you can still email your comments to the Department of Public Works and they become part of the public and official record. These are the email addresses: Chris.Buck@sfdpw.org and urbanforestry@sfdpw.org ]

At Geary and Masonic, there’s a grove of trees that softens an otherwise gritty and urban intersection. For pedestrians – including those who use the nearby bus shelter under the trees it provides a welcome green environment. These trees have been slated for removal. Neighbors are extremely upset, the more so because this project has been extensively discussed – but not the tree removal part. Instead, all the focus was on the loss of parking spaces as bike lanes were created. “I had the impression,” one neighbor said, “That they would be keeping all the existing trees and planting more trees.”

There’s a hearing scheduled for September 24th. A neighbor fighting to save these trees sent us this poster. You can print out the PDF here if you want to disseminate it: Geary_Masonic_Tree_removal 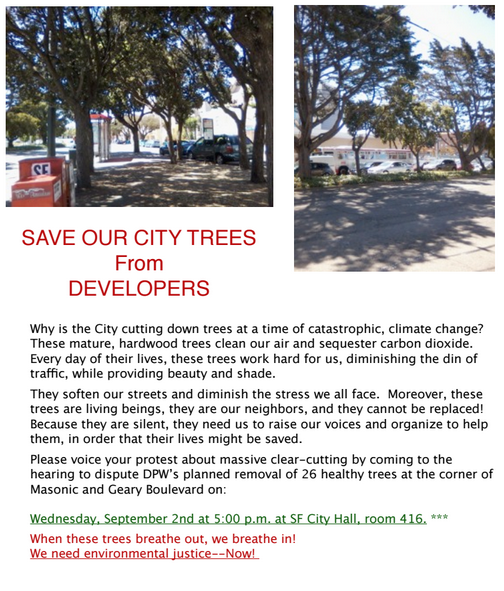 A neighbor wrote to us recently to say that 193 trees had been posted for removal in the Van Ness/ Lombard corridor:

“I want you to know that the SFMTA just put out tree notice removals on Van Ness and Lombard for their rapid transit project. There was no mention of this before to anyone living along the corridor when they began discussing this project. They are planning to cut down 193 mature trees along the corridor, and this is an outrage. These trees are important to the people who live along Van Ness and Lombard and they provide shade and bird habitat. They say they will plant 400 trees once the project is finished. What about all the birds who live in the tree opposite my mother’s home now? What about the hawks who nest opposite us?”

Here are the details of the hearing:

“I encourage you and any other interested party to attend the Public Hearing regarding the removal of the trees on August 24 at 5:30 p.m.in Room 416 of City Hall, located at 1 Dr. Carlton B. Goodlett Place. If you are unable to attend the hearing, you may submit written comments regarding the subject matter to the Bureau of Urban Forestry, 1680 Mission Street, 1st floor, San Francisco, CA 94103. These comments will be brought to the attention of the hearing officer and made a part of the official public record. ”

We don’t have any details yet, but the Treasure Island Development Agency is planning to cut down trees as part of its development plans. We would note that this is one location where Monarch butterflies overwinter in some years.

We believe even more tree removals are planned, for instance along Geary. The San Francisco Forest Alliance will try to keep track of these projects and post what information we can about the proposals.

San Francisco can do better than this. If all our public agencies realized the true benefits and value of mature trees, they would seek to preserve them rather than cutting them down and replacing them with saplings. Or nothing at all. We all recognize that trees sometimes need to be cut down to allow for roadwork or construction. But we do think that preserving trees needs a much higher priority than it currently gets, and the public needs better (and earlier) information than it currently gets.

We wrote about Seattle, where road-work was accompanied by notice to save trees, not remove them. Here’s another. It’s a tree not even as pretty or mature as the San Francisco victim at the top of the page, but it’s been saved.

Trees are cut down for all kinds of reasons in San Francisco. Poorly designed projects are a major factor. So is poor maintenance. We support Supervisor Scott Wiener’s effort to fund tree maintenance by city experts rather than leaving street trees to home owners who may not have the expertise or resources to care for it and instead destroy it. 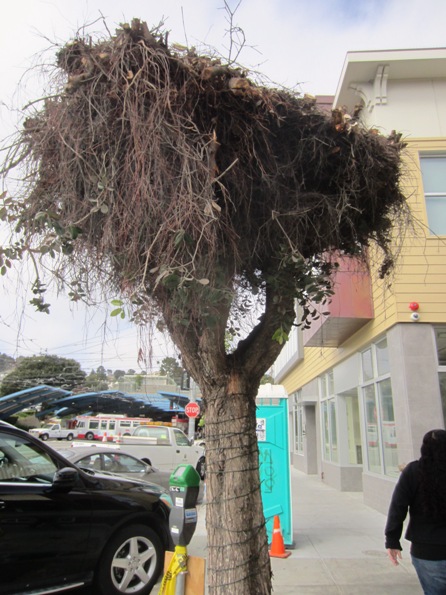 “The tree which moves some to tears of joy is in the eyes of others only a green thing that stands in the way.”
– William Blake, The Letters, 1799

This entry was posted in OTHER and tagged environment, street trees, trees, urban forest. Bookmark the permalink.

4 Responses to Can We Save These San Francisco Trees?