Recently, the San Francisco Recreation and Parks Department (SFRPD) spent an estimated half-million dollars on signage, most of which listed various Don’ts (though ironically, they start with “San Francisco Recreation & Parks Welcomes You”). All our parks and open spaces are peppered with them. Many park users, who earlier had no idea that the Natural Areas Program (NAP) was designed to restrict access and usage, are upset. They’ve started “fixing” the signs. Someone sent us these pictures:

The sign has been “edited” to warn people of toxic pesticide use and wryly note that most of the park is off-limits except to staff and supervised volunteers.

Of course, we have been talking about toxic pesticides, but here’s a recent picture. Roundup (glyphosate) has been identified as “probably carcinogenic” by the World Health Organization.

Here, it’s been used to destroy (non-native)  fennel, the pleasant-smelling feathery-leaved plant that is, incidentally, the host plant to the Anise Swallowtail, a beautiful butterfly that happens to be native.

In fact, as the altered sign below points out, nearly all the plants you see in San Francisco – including the grasslands NAP is ostensibly seeking to protect with its use of herbicides – are non-native. They still add to the beauty of the landscape, the greenery of our parks, and provide habitat for wildlife from insects to birds to mammals. The herbicides do nothing but poison these plants, leaving space for the next most aggressive plant to move in – most likely also non-native. 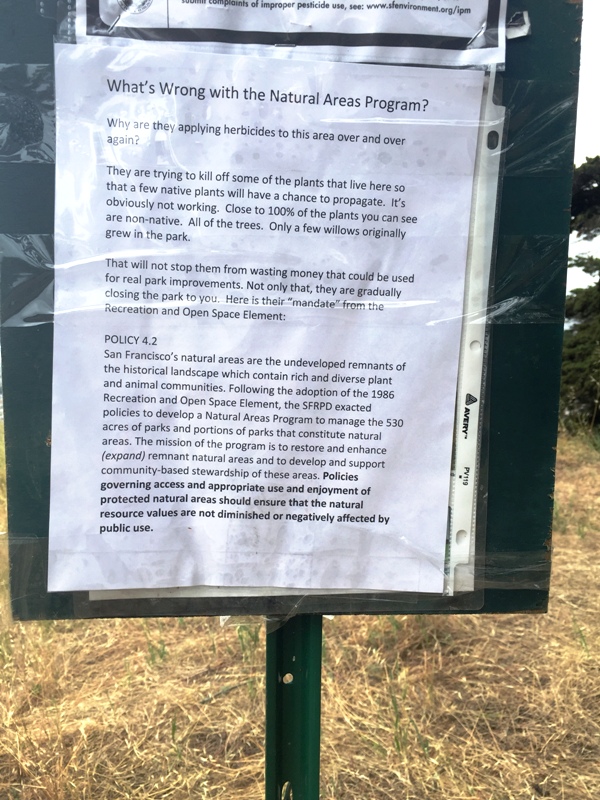