Wisconsin, Trees and Our Health

This is another of our first-person accounts. A reader visited Madison, Wisconsin and returned this report.

We were riding to the airport when traffic slowed on a tree-lined street owing to roadwork. I was reminded of a  friend’s comment about Minnesota: “We have two seasons – winter, and road repair.” Madison isn’t as extreme, but the warm days of spring are when this kind of  project gets done.

Necessary work, of course, but as I looked out the window I was saddened to see the trees on either side had yellow tape around their trunks. In San Francisco, colored tape  or paint spots usually mean the tree’s going to be cut down.

Nearly every tree along the road had a yellow ribbon. Madison’s a very green city with a lot of tree canopy, so perhaps they figured they could spare the trees that impinged on the road work or grew through power lines.

But then, as we stopped completely, I could read what was actually written on the yellow ribbons. It said “TREE PRESERVATION ZONE.” 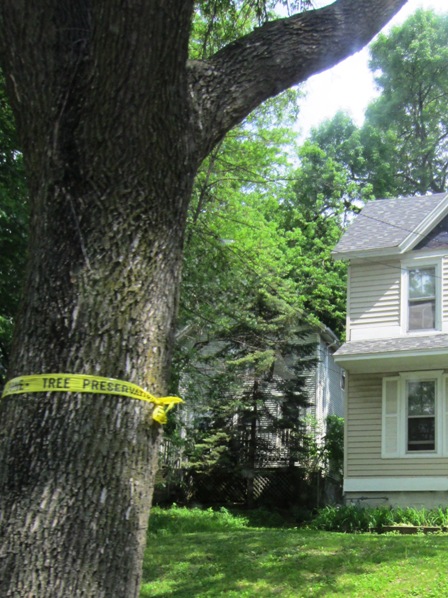 Perhaps they had paid attention to the research from University of Wisconsin (whose campus is only a few miles from where we’d paused). It showed less stress and depression in people who live in areas with more tree canopy. Here’s an excerpt from the UW-Madison press release on the research, which was published in April 2014.

“Across neighborhoods of Wisconsin, from the North Woods to the cities, the results are striking,” says Dr. Kristen Malecki, assistant professor of population health sciences at the UW School of Medicine and Public Health. “Higher levels of green space were associated with lower symptoms of anxiety, depression and stress.”

The study, published recently in the International Journal of Environmental Research and Public Health, combines mental-health data from the Survey of the Health of Wisconsin (SHOW) and Landsat 5 satellite data from July 2009 that analyzed how much vegetation was present in each of the SHOW census blocks.

About 2,500 Wisconsin residents from 229 neighborhoods answered an assessment that asked them to rate their symptoms of depression, anxiety and stress. The research team, which was also led by Dr. Kirsten Beyer of the Medical College of Wisconsin in Milwaukee, adjusted the results to make sure they weren’t confounded by race, age, income level, education, marital status, employment and other factors.

They found that across all strata of society, people who lived in a neighborhood with less than 10 percent tree canopy were much more likely to report symptoms of depression, stress and anxiety. So, for example, a poor person living on a logging road in the Chequamegon-Nicolet National Forest was more likely to be happy than a wealthier person living on a treeless block in Milwaukee.

San Francisco has among the smallest tree canopies of any major city, and the number of trees is shrinking each year. The “Natural Areas Program” plans to cut down 18,500 trees. Every project, whether it’s a playground renovation by SF Recreation and Parks, or road improvements by SFMTA, or water system work by the SF PUC, becomes an excuse to cut down more trees. If they replace the trees at all, it’s with saplings that will take decades to become mature and provide those health benefits.

1 Response to Wisconsin, Trees and Our Health