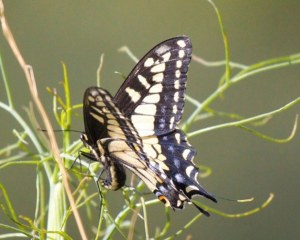 In Sunday’s San Francisco Chronicle, Matier & Ross had a blurb about the SF Commission on the Environment’s push to ban people from releasing butterflies at their weddings. Ok, that sounds good. We’re not even sure why exactly someone would want to release butterflies, but our point here is not to pass judgment on nuptials.

What gets our goat is that the very Commission on the Environment, which professes its love for butterflies, sets policy for the Department of the Environment, which in turn sanctions the killing of butterflies every day in the so-called Natural Areas. Approximately one-third of San Francisco’s parks and open space are managed by the Natural Areas Program (NAP). NAP boasts it uses the “least-hazardous pesticides as a last resort” against invasive plant species. “Prevention and non-chemical methods” are their first two heroic defenses, according to the warning signs for spraying frequently erected in Glen Canyon, Twin Peaks, Mount Davidson and many other places. 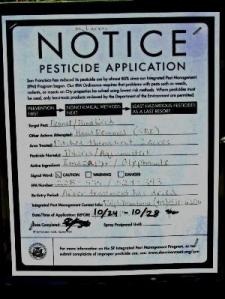 Pesticide being sprayed on fennel

Sadly, butterflies cannot read and it’s likely that young kids, dogs and wildlife that visit these areas are not too literate either. In April 2012, a federal study, also reported by the Chronicle, showed that a commonly used weed killer called Imazapyr (brand name Polaris) reduced a butterfly population by 1/3 when larvae and host plants were sprayed with it and two other standard herbicides. Ironically, land managers often justify such use with the intention to save the very species for which they are killing.

NAP’s use of pesticides has increased significantly in the past several years by all measures, including uses of Imazapyr and Glyphosate, otherwise known by the brand names Roundup and Aquamaster. The use of these pesticides on Twin Peaks is happening simultaneously with an effort to establish a Mission Blue butterfly population. The Mission Blue spends much of its larval stage on the ground, amid leaf-litter where it could come into contact with the herbicides. And ironically, one of the plants they’re trying to destroy with the pesticides is fennel, the main nursery plant for the Anise Swallowtail butterfly.

The Department of the Environment (which dictates which pesticides may be used on city-owned land) and NAP like to spin their metrics by qualifying the amount of “active ingredient” rather than frequency. We don’t buy it. If you’d like to learn more, we’ve researched their usage and reported on the rampant use of these pesticides that includes skyrocketing amounts of active ingredient.

The Commission and Department of the Environment are welcome to justify their approval of pesticides anytime they would like to have space on our site. We believe butterflies would breathe a lot easier, too, knowing their best interests are at heart. 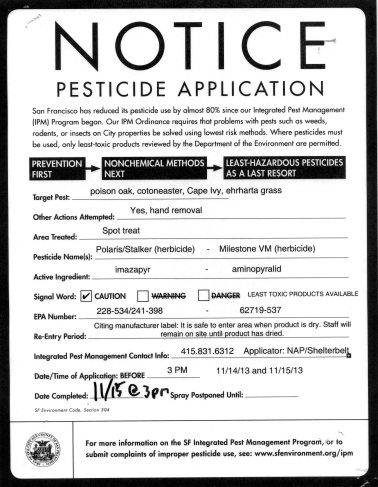