We saw this sign posted on Mt Davidson this week: 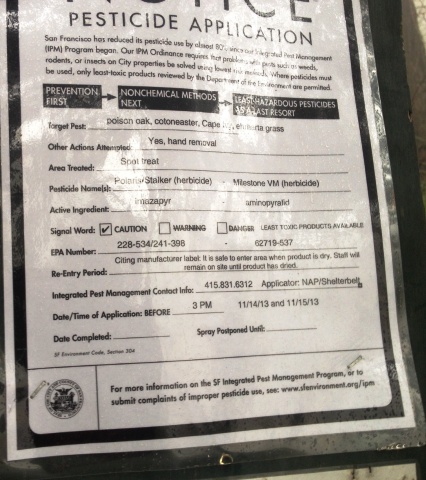 It is too wet to apply these herbicides now and these two herbicides are very dangerous, one is banned in Europe and the other in New York:

In our January, 2013 post  (http://sfforest.net/2013/01/17/sfs-natural-areas-program-uses-even-more-pesticides/) we noted that the Natural Areas Program (NAP) used more pesticides than in 2012 than any year beginning in 2008, which was the first year for which we have data provided by the City.

An escalating use of herbicides is bad for the environment and the people, pets and wildlife using these parks. It sends a damaging message about priorities and indicates a lack of success with the NAP program.

In August, 2013, we issued (http://sfforest.net/category/applies-pesticides/) a Rec and Park Dept Pesticides Report for the first half of 2013;  we noted then that Rec and Park uses more herbicides in the natural areas than in the rest of the Parks together. Also, NAP is the main user by far of the most toxic Tier I pesticide:  Garlon.