On October 24th we reported the planned tree removals along the Creekside Trial (west side of Islais Creek) in Glen Canyon. We are now submitting aftermath photos: the conditions now, after the Glen Canyon Trails project “tree work”.

Background: HORT Science, recipient of Park Bond funding, is used by the Rec and Park Park dept to assess the suitability of  trees located along the proposed trails. Their September 6, 20013 report for Glen Canyon Park is here. In summary they recommended that 30 trees be removed: 26 blue gums, 2 arroyo willows and one each of yellow willow and Monterey cypress. Ten (10) trees were identified as needing to be pruned including 6 arroyo willow, 2 blue gum, one Monterey cypress and one river red gum. 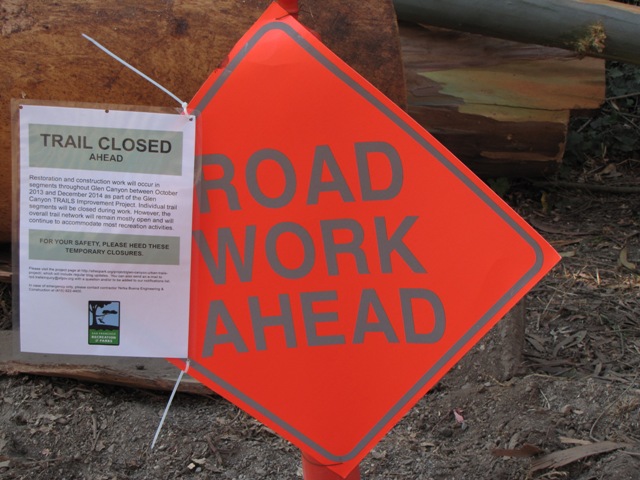 Trails are temporarily closed during the tree cutting

Park and Rec is calling this “…completing hazardous tree mitigation work”  but does not address how these trees could be saved by re-rerouting or narrowing trails, thinning the crowns, pruning and tipping, weight redistribution, limb removal, and cabling or bracing. 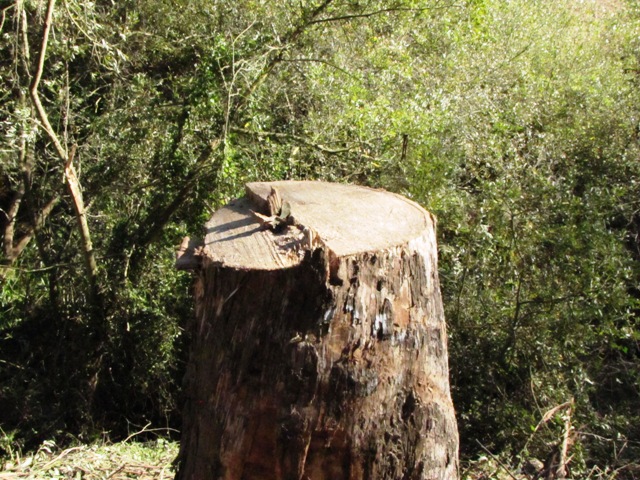 Even healthy eucalyptus trees are rated negatively by HORT and RPD as unsuitable for preservation merely because they are not native and therefore considered invasive. 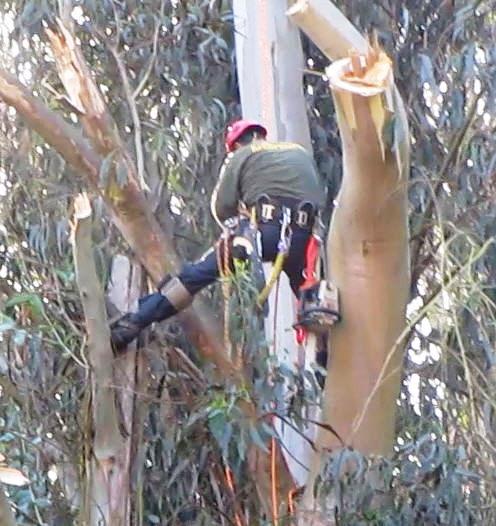 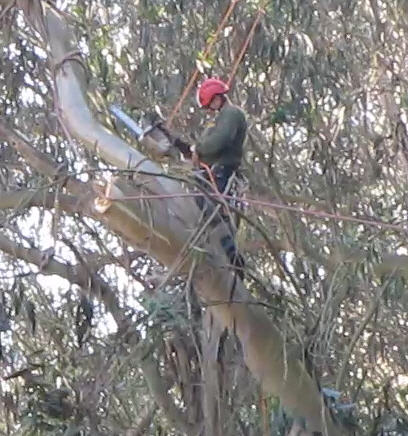 cut limbs are tied and lowered to the ground 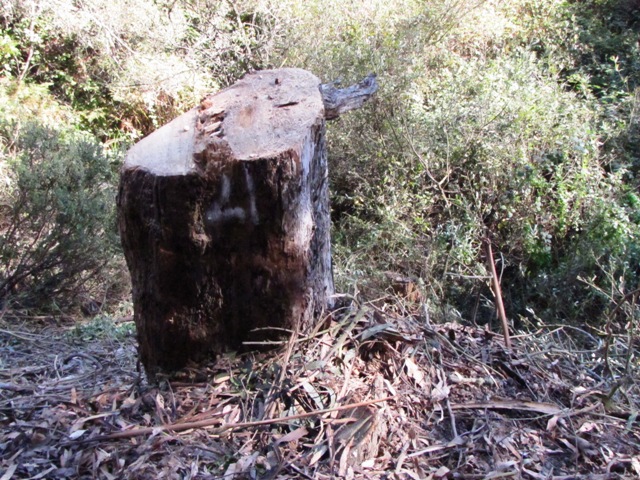 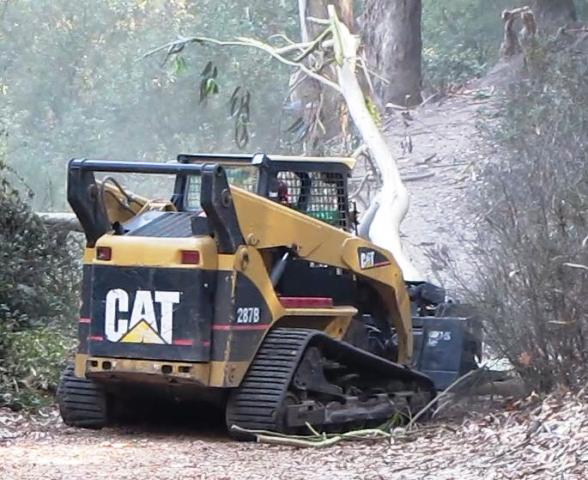 Banana Slug Way – as this trail is known – will be transformed 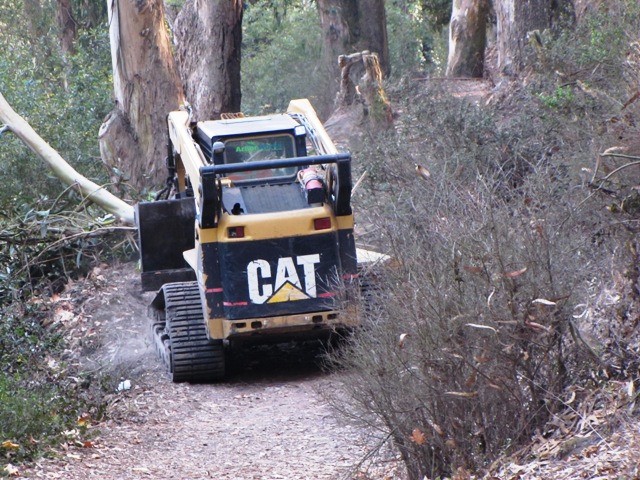 A crane was used on Alms Road, (Tuesday, October 29) to take out a tree that had the misfortune of growing in the middle of Islais Creek.  A Blue gum, trunk diameter 50 inches, was deemed a potential hazard (said HORT: “Center of creek. Stands alone. Leaning & bowed E. over Alms Road.” ). 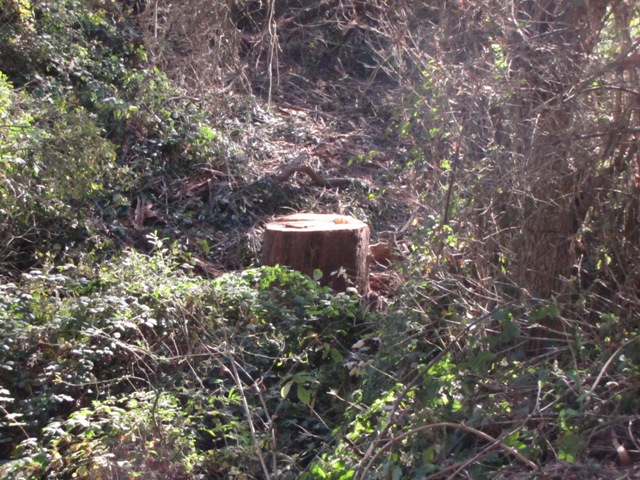 Eucalyptus Stump – middle of Islais Creek (did it impeded the flow of creek water? ) 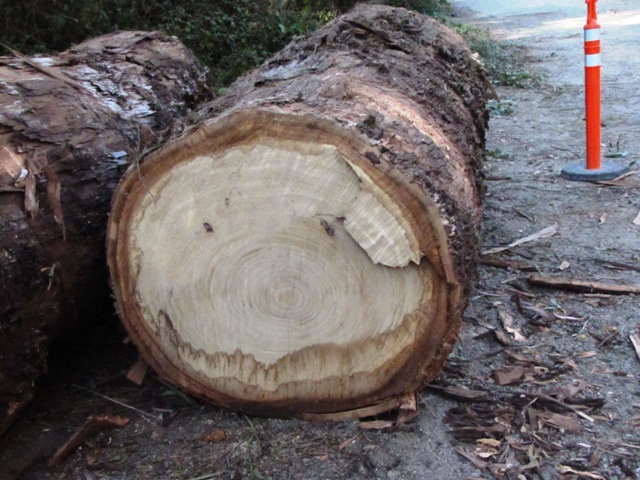 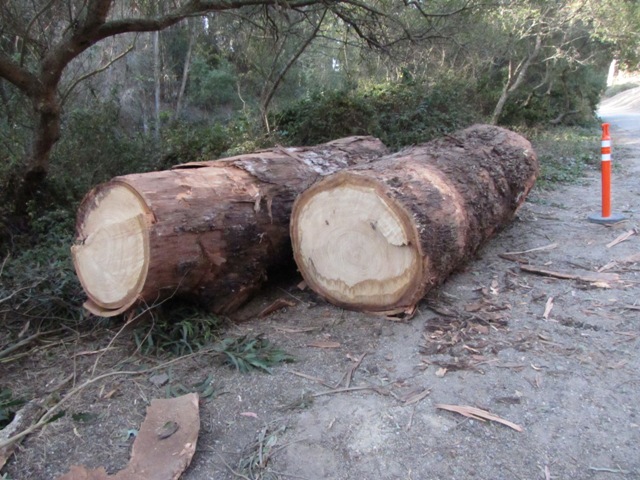 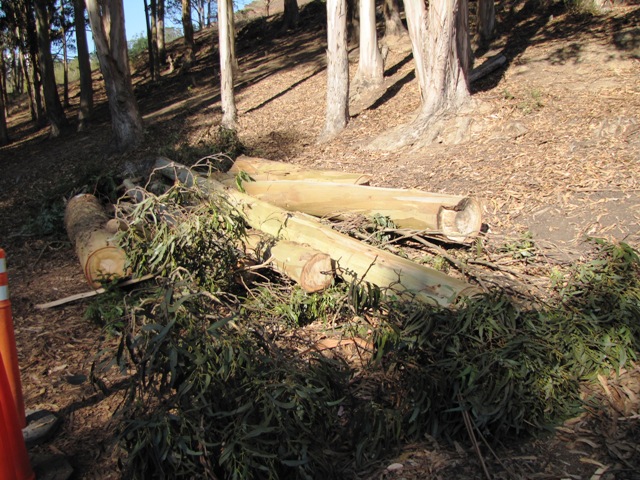 Some of HORT’s reasons for the decisions to remove selected trees: “poor form & structure”;  “Sharp lean E. over trail”;  “upright but one-sided towards trail”;  “Leans over trail”;  “cracked branches”.

Let’s repair these trees rather than destroy them. It would cost less money and be better for the environment. 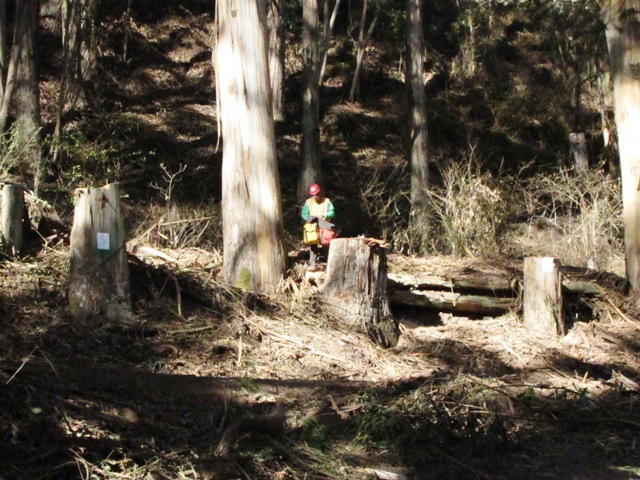 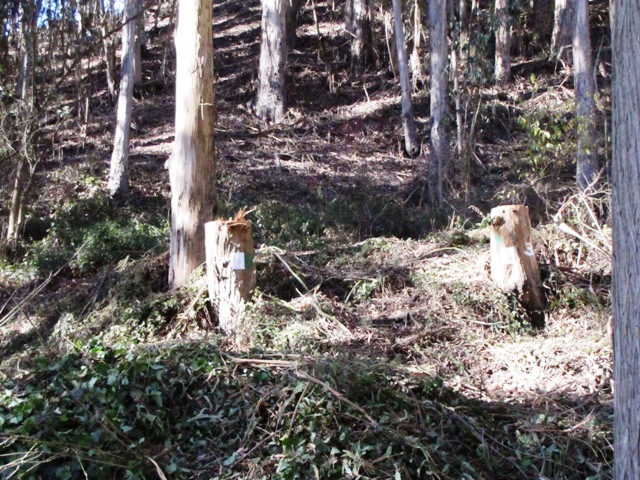 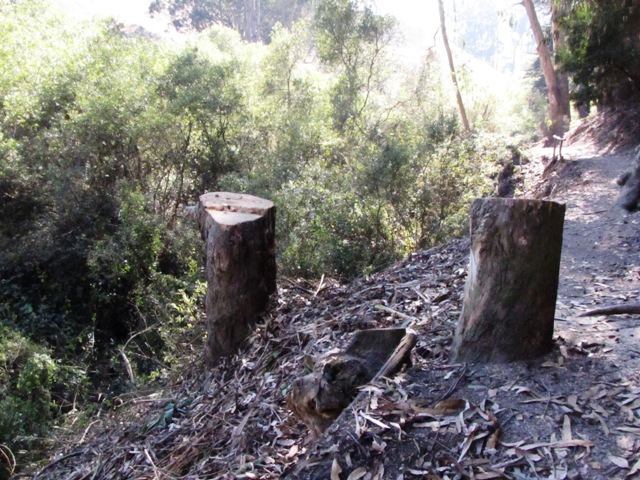 “upright but one-sided towards trail”

Ugly stumps left to remind us of how well are Park Bond dollars are being used to destroy our parks. 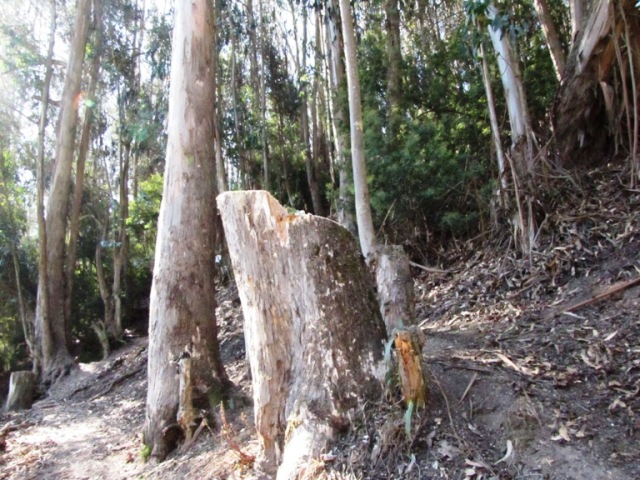 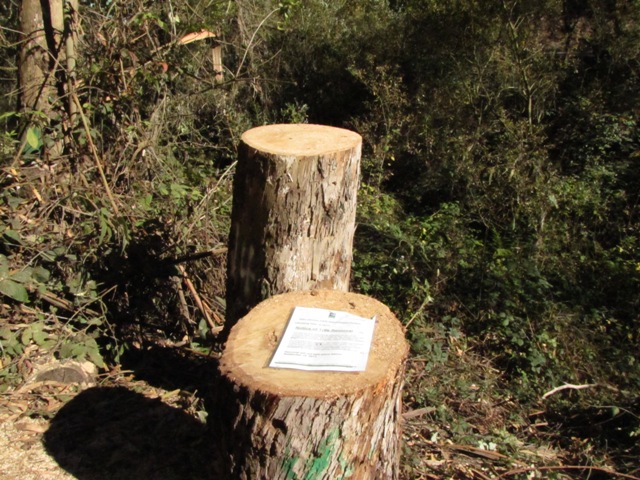 Per community requests, Rec and Park will allow the “Ticket Tree” to be a stump. This is a Monterey Cypress stump just west of the trail from the Rec Center to Silver Tree Day camp. They have cut it off higher than just a stump to accommodate popular children’s play with the slot in the tree; children use it as a mail box to deliver
letters to each other.

Are our children being taught by RPD that the best tree is a dead stump? 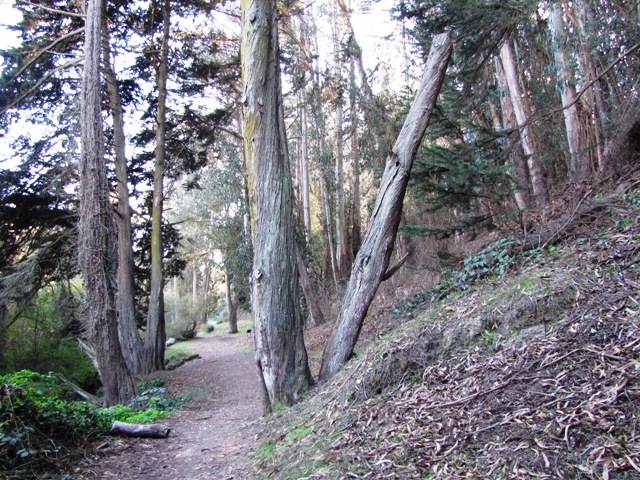 We did notice a larger than usual cutting of trees near the ball field.  This is how it looked before the recent cuts: 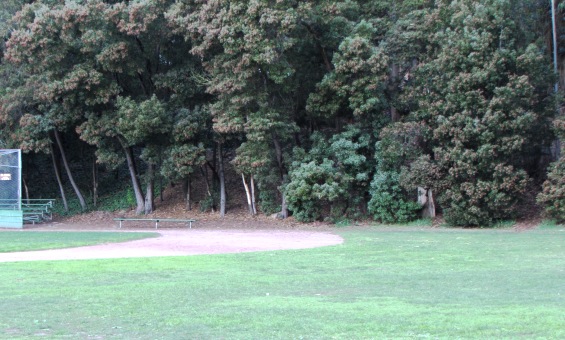 Prior view: from small ball field

And how it looks now. 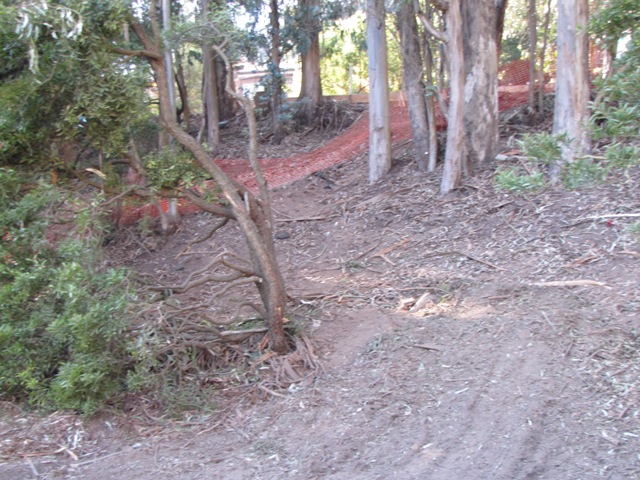 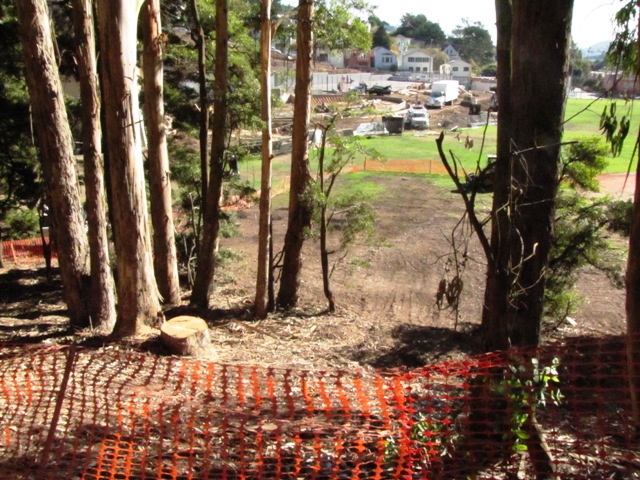 The city’s Rec and Park Department is “excited to be starting this extensive capital improvement project, funded by the 2008 Clean and Safe Neighborhood Parks Bond and by multiple Habitat Conservation Program grants.”

We, however, are less excited when we observe the tree damage to what was a wonderful, quirky trail on west side of Islais Creek in Glen Canyon Park.

Note that the 2008 parks bond allocated $900,000 of the $5 million Parks Trails Improvement Program
for this Glen Canyon project.  That’s alot of money for ADA compliant pathways, ‘turnpike’ parkways, retaining walls, split rail fences – from Bosworth St, all the way up to Portloa Drive, past the School of the Arts (SOTA).