Photographic evidence that eucalyptus is NOT invasive

Our subscribers have probably noticed that we are studying the case the California Invasive Plant Council (Cal-IPC) has made to classify Blue Gum eucalyptus (Eucalyptus globulus) as “invasive.”  We have reported to our readers that Cal-IPC has made speculative claims about harm to wildlife that are unsupported by scientific evidence:

“Once a tree matures and produces seed, it can produce a profusion of progeny within a few years; doubling of stand area within 10 years possible but not well documented Without quantitative data, this response is conservative; stands have certainly expanded far beyond initial plantings in many locations, based on unpublished photodocumentation (1, 2) and personal observations (3)”  [numbers refer to cited “references”]

And here is the “evidence” Cal-IPC provides in support of this rather dire prediction of the invasiveness of Blue Gum in California:

Therefore, the only source of information about the invasiveness of Blue Gum that we can evaluate is the one that is available on the internet HERE.

First a word about the town of Caspar, which is located 4 miles north of Mendocino on the coast of California.  According to the 2010 census, it has a population of 509 souls.  We celebrated New Years Eve there many years ago in a rocking bar, so we have fond memories of it.  It is a lovely little town.  We mention its small size to put its newsletter into perspective.  It’s hardly mainstream journalism.

The article in the “Caspar Newsletter” starts with the recommendation of Peter Warner to eradicate all eucalyptus in Caspar:

“In this newsletter you find several articles written by strong advocates of dire means, including the authoritative Eucalyptus indictment written by State Parks’ expert on managing exotics Peter Warner, who advocates a draconian solution:  cutting and then careful application of a dire chemical to eliminate every tree.”

In other words, the “Caspar Newsletter” is merely a repetition of Peter Warner’s agenda to eradicate eucalyptus and poison them with herbicides to prevent them from resprouting.  It’s not an independent source of information.

The only photographic evidence of the invasiveness of Blue Gum eucalyptus provided by Cal-IPC’s assessment is in the article in “Caspar News:”

“Eucalyptus encroaching on the ocean view”

There are three problems with this photograph with respect to the claim that it is evidence of the invasiveness of eucalypts:

In other words the “evidence” provided by the Cal-IPC assessment that E. globulus is very invasive is not supported by the evidence that is provided.

It is possible to document invasiveness with photographic evidence.  We have provided our readers with two such examples that indicate that Blue Gum eucalyptus is not invasive in the San Francisco Bay Area: 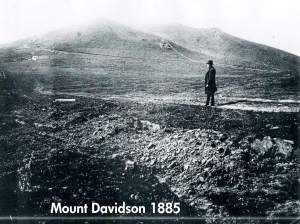 Since Sutro didn’t own all of Mt. Davidson, there was a sharp line between the forest and the grassland when this photo was taken in 1927. 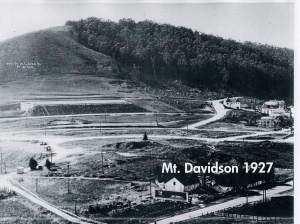 Over 80 years later, in a photo taken in 2010, there is still a sharp line between the forest and the grassland.  We see more trees in the foreground where residential areas have been developed and home owners have planted more trees, but the dividing line on the mountain is nearly unchanged.

There is one well-documented case of significant expansion of planted E. globuluson Angel Island.  Using historical records of planting of E. globulus on 23.6 acres as well as observations of uniform spacing of those plantings, McBride et. al., determined that E. globulusspread to 86.1 acres.  The trees were planted starting in the mid-1870s to 1933 and their spread was measured in 1988.  The authors of the study reported that most spreading occurred in areas of high soil moisture, such as swales, and in disturbed areas such as road cuts.  This is also the only documented case of significant expansion of planted E. globulus mentioned in the US Forest Service plant data base. (2)

The one exception to the general rule that Blue Gum eucalyptus has not been invasive in California is consistent with what we know about Angel Island and about the limitations of seed dispersal and germination rates of Blue Gum eucalyptus:

How invasive is Blue Gum eucalyptus?

If our readers are aware of any other documented cases of spreading of eucalyptus, we invite them to inform us.  We are committed to accurately informing ourselves and our readers of the reality of invasiveness of Blue Gum eucalyptus.