Monarch butterflies in California need eucalyptus trees for their winter roost | Death of a Million Trees. 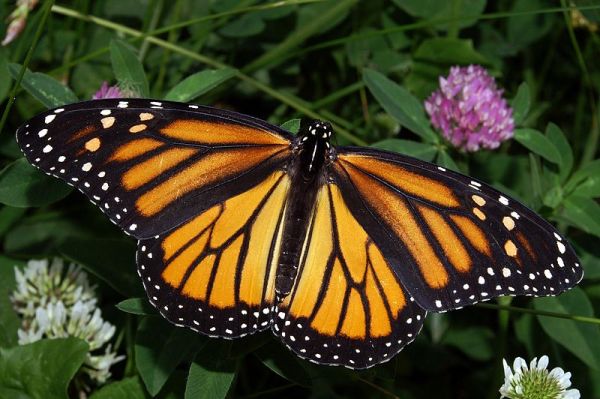 No single monarch makes the entire journey.  It takes two to three generations of monarchs to make the entire round trip.  How each successive generation knows the route remains largely a mystery, although theories exist.  There are a couple of fascinating books about the migration that we recommend to our readers.  Four Wings and a Prayer is a book about the 38-year effort of Canadian entomologists, Fred and Norma Urquhart, to understand the migration.  It reads more like a suspenseful mystery than the non-fiction book that it is.  Flight Behavior is by Barbara Kingsolver, one of our favorite novelists because nature is often the subject of her work.  Although it is fiction, it has been carefully researched by Kingsolver who studied biology before becoming a writer.  It is engaging both as a cautionary tale for environmentalists and as a personal redemption story.

The western migration of the monarch

We will focus on the western migration of the monarch because that’s our neck of the woods, but also because this migration is one of the reasons why many people who care about nature and wildlife object to the destruction of eucalyptus trees.  Eucalypts are the preferred trees for over-wintering monarchs: “Three types of trees were used most frequently by roosting monarchs:  eucalyptus (75% of the habitats primarily Eucalyptus globulus), pine (20% of the habitats; primarily Pinus radiata), and cypress (16% of the Cupressus macrocarpa).  Twelve other tree species were identified…with a combined prevalence of only 10%.” (1)

For those who may not know the botanical names, that’s Monterey pine and Monterey cypress that are the runners-up to eucalypts as the most popular trees for over-wintering monarchs.  Although monarchs roost in those trees in their native range on the Monterey peninsula, they also use those species outside their native range.  Unfortunately, just as the eucalyptus is a target of native plant advocates who demand their destruction because they are not native, bothMonterey pine and Monterey cypress are targeted for destruction outside their native range.  For example, both Monterey pine and Monterey cypress will be eradicated from hundreds of acres of public land if the FEMA grants are funded in the East Bay.  This is just 150 miles away from where those trees are native and there is fossil evidence that they existed in the East Bay in the distant past.  In other words, most of the trees used by monarchs for their winter homes are in jeopardy of being destroyed by the native plant movement.

One of the reasons why we are telling this story is that it is a tidy little example of the justifications fabricated by native plant advocates to support their destructive agenda.  In the case of the monarch, native plant advocates claim that prior to the arrival of Europeans, before eucalypts were planted and Monterey pines and cypresses were planted outside their native range, the monarch used native trees for their over-wintering habitat.  The “assessment form” used by the California Invasive Plant Council to classify Blue Gum eucalyptus as invasive says,  “[The Blue Gum] provides roost sites for migratory monarch butterflies…ecological niches for butterflies and raptors probably formerly filled by native plant species.”  No evidence is provided in support of that statement.  We have also read that claim in comments of native plant advocates on internet articles in response to those who defend eucalypts because they are needed by monarchs.

Like many of the “cover stories” of native plant advocates, this is just not true.  A search of the scientific literature about monarchs enables us to bust this particular myth to smithereens.  It would be simple enough for native plant advocates to look at the evidence before spinning their tales, but it is apparently easier to make it up, especially when they are rarely questioned.  Million Trees exists to fill this informational void.

The historical record of the western migration of monarchs

“’Previous to that, no mention has been found of this interesting phenomenon…The early Spanish chronicles and traditions make no mention of it, although Monterey, a scant three miles distant, was gay with life when the last century came in…even David Douglas, the world famed botanist, and the keenest-eyes of all the strangers who came [to California] is silent regarding it.’…Douglas, the indefatigable fir tree collector, appears to have made no mention of the phenomenon in 1830-1832, despite spending two winters at Monterey.” (2)

Vane-Wright believes the eastern monarch migration to Mexico also began around the same time.  His theory is that the agricultural practices of early settlers, which cleared trees, created a population explosion of the milkweed that is the host plant of monarchs.  More milkweeds resulted in more monarchs and monarchs began to migrate in response to population pressure, he believes.  He calls this the “Columbus Hypothesis.”  (2)

Biological facts explain why monarchs choose these species of trees

Aside from the historical record, the biology of monarchs and the physical characteristics of the trees in which they over-winter explain why these species of trees are required by the over-wintering monarch.  During the late fall and winter, monarchs enter a dormant phase called diapause.  They continue to need nectar and moisture during that period, but they are not very active, so these resources must be close by.  Although they migrate to the coast from Mendocino to Mexico, they are most abundant around the mid-point of that range, where temperatures and rainfall are moderate.  Most of the approximately 250 roosting sites are within 2.4 kilometers of the ocean, so wind protection is important for them while they are roosting.  All of these factors predict the ideal conditions provided by eucalyptus trees:

All of these requirements for the monarch’s winter roost point to their dependence on eucalyptus, pines and cypress.  The trees that are native to the narrow strip of the coast of California do not meet these criteria.  They are not tall enough and they do not grow that close to the ocean because they do not tolerate wind.  The native vegetation of that narrow strip of California coast is predominately dune scrub and coastal grassland prairie.  And these are the vegetation types that the ecological “restorations” in the Bay Area are trying to re-create.  These vegetation types will not be suitable habitat for over-wintering monarchs.  Furhtermore, plans to drastically thin eucalyptus forests on hundreds of acres of the East Bay Regional Park District will render those habitats useless for over-wintering monarchs.

In addition to the physical properties of eucalyptus, the monarch benefits from the fact that it is flowering from about December to May, while the monarch is roosting in the tree.  The flowers of eucalyptus contain a copious amount of nectar which is also important to the honeybee because it is flowering at a time when there are few other sources of nectar.  One study reported observing monarchs feeding on the flowers of Eucalyptus globulus. (5)

We have mixed feelings about reporting this research about monarchs to our readers because there is some risk to the monarchs in doing so.  The evidence suggests that monarchs did not over-winter in California prior to 1864, after the magical date that nativists have selected to freeze-frame California’s landscape to their nativist ideal.  Here in the San Francisco Bay Area, this magical date is 1769, when the expedition of Portola laid eyes on the San Francisco Bay.  Will nativists declare the monarch an alien invader to be eradicated along with the hundreds of plants and animals they claim “don’t belong here?”  This may seem a far-fetched conjecture, but keep in mind that the European honeybee is being eradicated in some “restorations” because it is not native.  The honeybee is essential to the survival of American agriculture, yet its existence is threatened by the radical agenda of the native plant movement.

That’s the risk we take in reporting this evidence because we hope that it helps our readers to understand the absurdity of the nativist agenda.

(3)    Andres Kleiman and Miguel Franco, “Don’t See the Forest for the Butterflies:  The Need for Understanding Forest Dynamics at Monarch Overwintering Sites,” in The Monarch Butterfly Biology and Conservation, Cornell University Press, 2004.

(4)    Kingston Leong, et. al., “Analysis of the Pattern of Distribution and Abundance of Monarch Overwintering Sites along the California Coastline.” in The Monarch Butterfly Biology and Conservation, Cornell University Press, 2004.

This entry was posted in OTHER, Ruins Habitat and tagged California Invasive Plant Counci, Monarch butterfly. Bookmark the permalink.