Our readers have been following the story of Sutro Forest, the beautiful Cloud Forest that lies in San Francisco’s fog belt. It captures moisture from the marine layer fog, and is thus wet all through the summer and into the Fall, which protects it from fire-hazard. In January 2013, UCSF issued a Draft Environmental Impact Report (DEIR) on a Plan threatening to cut down 90% of the trees on 3/4 of the Mt Sutro Open Space Reserve.

Until recently, we understood that the tree-felling had been postponed to 2014, as UCSF needed more time to respond to the detailed and voluminous public comments on the DEIR.

Then UCSF sent out a notice that it would be performing “urgent fire safety work,” felling over 1000 trees and mowing down understory on Mount Sutro in response to San Francisco Fire Department (SFFD) having provided an “independent assessment of the Reserve.” (We reported on that HERE.)  On its own website announcing it had completed work, UCSF says, “The measures, which began Aug. 26, are in response to an assessment this summer by the San Francisco Fire Department that found “extra hazardous fire conditions” in the urban forest.”

All of this creates the impression that SFFD came in, took a close look at the forest, and found “extra hazardous conditions” – and that UCSF’s actions were in response.  But is that what really happened?

The determination that fire conditions are “extra-hazardous” is important. If they’re just the normal fire-risk, then the required clearance to structures is 30 feet. If it’s “extra-hazardous” then it’s 100 feet.

At 30 feet of clearance, UCSF would need to do very little: This amount of clearance already existed in most places.  But by declaring it “extra-hazardous” UCSF decided to clear understory and slender trees on around 20-25% of the Mt Sutro Open Space Reserve.

The discussions about Sutro Forest have been going on since about 1995. Right now, there’s a Draft EIR on a Management Plan being processed. This sudden August 15th UCSF notice planned to start work within 10 days, without any public meeting or discussion, or reference to the California Environmental Quality Act (CEQA) because it addressed “immediate fire safety and emergency concerns.”

So of course we were very interested in just how the extra hazard – and emergency – had suddenly been decided.

UCSF claimed an “independent assessment” by the SF Fire Department (SFFD).  But was it?

Under the Sunshine Act, we obtained documents from SFFD, covering the correspondence between UCSF and the San Francisco Fire Department. It demonstrates no independent assessment nor any evidence of “extra-hazardous” fire conditions at that time.  It appears that UCSF, finding its efforts to start gutting the forest this year had been stymied by the overwhelming public opposition to its Draft EIR, decided to do an end run around CEQA.

(This is a PDF of email correspondence apparently trying to set up such a meeting – but no evidence or acknowledgement that it occurred. Please note UCSF labeled them ‘Attorney-Client Privileged’ – even though they are not. This looks like they’re trying to prevent the public from seeing them. Email messages July 2013 (UCSF-SFFD) )

(Here’s the PDF of correspondence between UCSF and SFFD indicating that UCSF provided the draft letter: UCSF – SFFD emails July 2013 )

Is it possible that this letter, too, was drafted by UCSF? We don’t know. If we find out one way or the other, we’ll publish it here.

In any case, SFFD has clearly provided this support as a courtesy to UCSF, and there has still been no independent substantiation of the ‘extra-hazardous’ conditions throughout the areas where the “work” was performed. Or of any emergency. 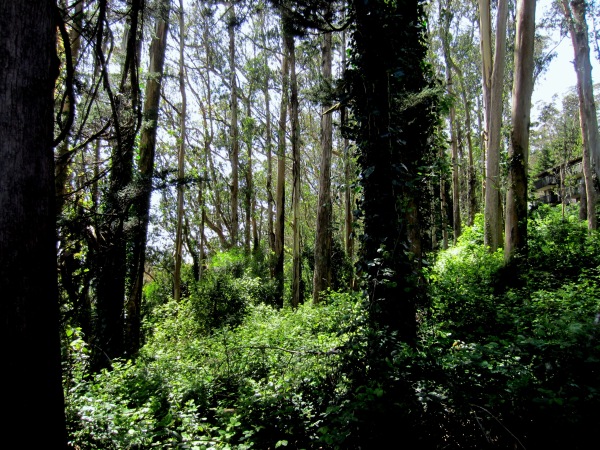