The City That Knows How – Seattle?

This is a first-person account from a reader, but it’s not one of our occasional Park Visitor series. It’s about Seattle.

A few months ago, I visited Seattle. Like every tourist, at some point I headed for the Seattle Center, home of the Space Needle, the Chihuly Garden, the EMP Museum.  We parked in the underground garage, and emerged at street level to an avenue of graceful trees.

Some road work was in progress, and all the trees had small notices on them.  Coming from  San Francisco, I knew what those must be, and my heart sank.  Removal notices. After all, every project in San Francisco means removing trees, doesn’t it?

Not here.  As I got closer, I found they were the exact opposite of removal notices. 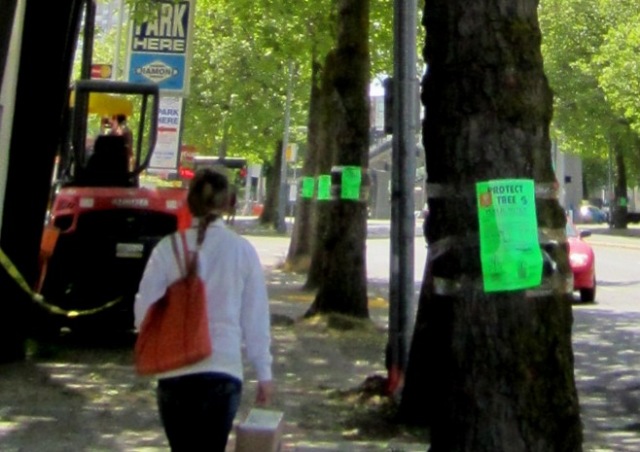 In fact, they were notices to protect the trees. They went further. To each tree, they ascribed a monetary value, and it was not trivial. This tree is valued at approximately $9,000. 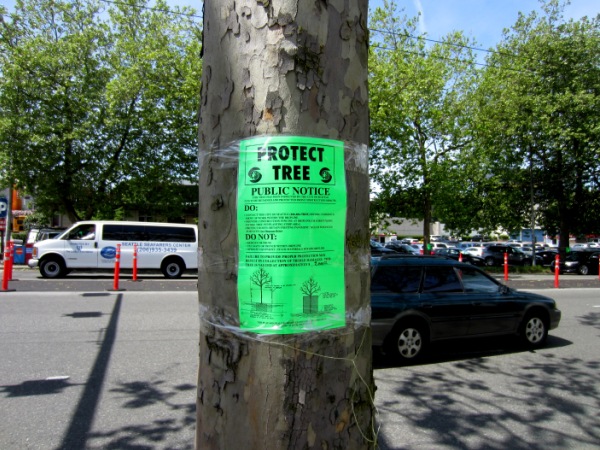 Here’s the notice up close. It has specific instructions, and a requirement for notification.  It not only doesn’t permit the tree to be removed, it tries to protect it against damage from the process of construction. 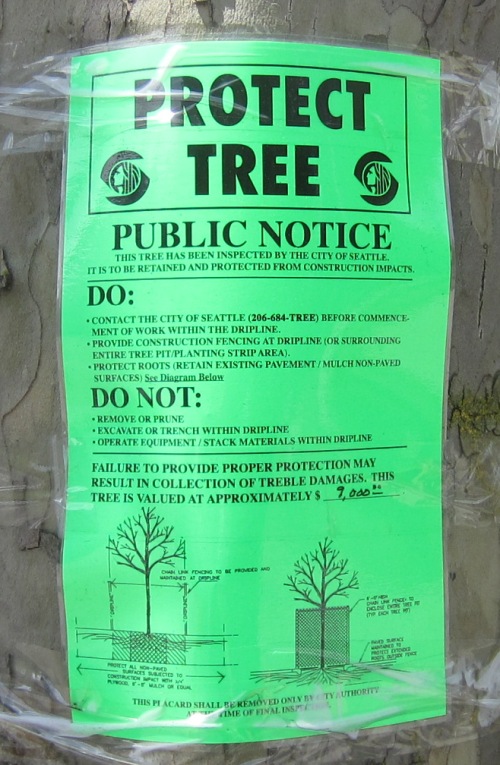 Another, larger, tree nearby had an even higher valuation. Here’s a notice for a $15,200 tree.  And none of these trees was anywhere near the size of some of the larger ones we see in San Francisco and cut down so casually.  I don’t know how they calculate the value, but if we go by size, we probably lost hundreds of thousands of dollars worth of trees.

Maybe San Francisco should have a system by which the value of each tree cut down has to be donated to some group like Friends of the Urban Forest.  (But not to the city, that would be a perverse incentive.)

For a start, every project should publicly list  up front every tree to be removed, together with a monetary value reflecting the replacement cost of a tree that size.  In some cases, this may even be reason to revise or scrap a project.

Most of the benefits of trees – carbon storage, pollution protection, habitat value, wind protection, slope stabilization, visual impact – are linked to a tree’s size and maturity. But instead of protecting our mature and majestic trees, San Francisco appears to focus on negatives and looks for ways and means to remove them. This may be one of the reasons our urban tree canopy is one of the smallest among major US cities – and is shrinking, not expanding.

This entry was posted in OTHER and tagged environment, San Francisco Recreation and Parks, trees. Bookmark the permalink.

4 Responses to The City That Knows How – Seattle?