[Note: This article is slightly modified from one that originally appeared at SutroForest.com.]

This is an open letter to Jake Sigg who has wrongly criticized the San Francisco Forest Alliance and Save Sutro Forest. We invite Mr. Sigg – doyen of San Francisco’s native plant activists and publisher of an email newsletter – to talk directly with us any time. We believe that talking to people with a different point of view is important.

However, let’s set the record straight with facts, shall we?

Yesterday, your newsletter published a post regarding CalFire’s assessment of risk in San Francisco. It  included an astonishing allegation:

“SF Forest Alliance/sutroforest.com has been known for selective quotations that alter or reverse what writers intended. We have all learned to question authority and to insist on transparency. SFFA/sutroforest.com needs to become transparent in its messages. Its withholding of the complete opinion of Cal-Fire deprives the public of the information it needs to protect itself.”

We object. We never “alter or reverse” what writers intended. We stand for transparency, and try as far as we can to include references so people can go back and look at sources if they wish. (In this post, relevant links are at the end of this article.)

Nor have we (or SutroForest.com) withheld “the complete opinion of CalFire.” In fact, what we have quoted of CalFire is taken from two sources that you or other readers may verify: The CalFire website; and the FEMA letter about Mount Sutro Forest.

That is where we obtained this map, which shows that CalFire gives its lowest hazard rating to Sutro Forest (and most of San Francisco). We provide that link again here: CalFire Hazard Map.

We also referred to the page on the CalFire website, where in an update it said:  “Update, 11/2008:
CAL FIRE has determined that this county has no Very High Fire Hazard Severity Zones (VHFHSZ) in LRA [Local Responsibility Area]…”

(2) A letter from FEMA to Cal EMA regarding UCSF’s application for funding to cut down trees on Mount Sutro.

Here is an excerpt from that letter, originally posted at SutroForest.com. It includes a conversation that FEMA had with a Wildland Fire Scientist in CalFire: 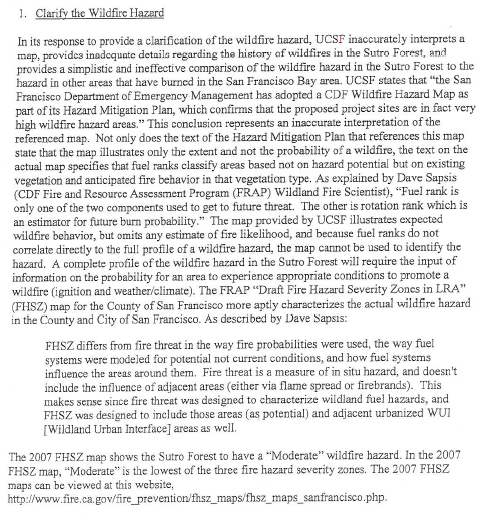 We do not think that “alters or reverses” the intent of the letter. But if you wish to verify this, the full letter is linked at the end of this article.

SO IS WHAT CALFIRE SAID DIFFERENT?

Now for the substantive objection. We think that what we’re seeing is different conclusions reached by our opponents and ourselves.

What CalFire explained is that fire has two factors: Fuel Rank, and Rotation Rank (or the risk of ignition). Fuel rank is only density of vegetation, and all agree that the vegetation density in Mount Sutro Forest is high.

The second factor is the risk of ignition, and that is low in most of San Francisco. (The CalFire map above shows a little orange spot on the edge of San Mateo County that has High – but not Very High – risk.) San Francisco’s climate is cool and not extreme. Right now, while the rest of the country has a heat wave, the fog blows through our city. 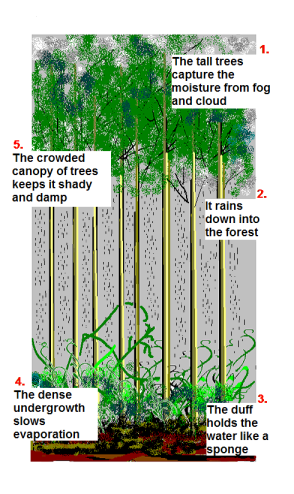 Ignition risk is particularly low in Mount Sutro Forest, which lies directly in the city’s fog belt (as also in Mount Davidson, for the same reason). The Cloud Forest effect increases moisture levels considerably as the trees harvest moisture from the fog, and store it in the dense understory. It’s obvious that the best way to keep ignition risk low is to trap that moisture and reduce evaporation.

The post included in your newsletter describes an anonymous conversation with an unnamed person within CalFire.   It is unclear what recommendations discussed there come from the interviewer, or from an individual within CalFire. (Though you apparently consider it the “complete opinion of Cal-Fire,” it does not appear on the CalFire website.)

We hope to make our own contact with CalFire, and report on it.

WHY THE UCSF PLAN IS COUNTERPRODUCTIVE

Even if the UCSF Plan for Sutro Forest reduced the Fuel Rank (and we don’t see how it would, given that the Plan would be to fell the trees and leave them there as logs and chips), it would raise the ignition risk by drying out the forest, reducing both harvested and retained moisture, and by increasing wind velocities in this very windy part of San Francisco.

FEMA had similar questions for UCSF. This is again a quote from the same letter cited above.

This doesn’t look like a good trade-off, especially since this is not a distant wild-land, but in the midst of the city with access to water sources and fire-fighting capability.

There is actually a fire-station on the Stanyan side of the forest, a fact that was cited during the hearing about opening the trail from Stanyan into the forest through SF RPD’s Interior Greenbelt. At that meeting, Ray Moritz (who was also hired by UCSF separately) allayed neighbors’ concerns about increased ignition risk from such a trail by saying that overall risk was low. The report of that meeting, written from contemporaneous notes, is HERE.

We don’t think a model based on increasing ignition risk while reducing fuel is workable for this site. And aside from the environmental damage this “solution” would cause, in reduced carbon sequestration, poorer pollution control, potential hillside destabilization, increased water run-off, lost habitat, and use of substantial amounts of toxic pesticides – this is not reversible in the short or medium term. If we discover it’s all a horrible mistake, it cannot be undone once the trees lie on the ground as logs and chips.

And if anyone wishes to further verify that this indeed is the letter – it is available to anyone who requests it under the Freedom of Information Act from FEMA, and as Public Records Information from UCSF.

This entry was posted in OTHER and tagged environment, fire hazard, Jake Sigg, trees. Bookmark the permalink.