A group of 17 neighbors gathered for a summer walk on Mount Davidson …  in typical summer weather: super foggy. The group walked through the beautiful woods, shrouded in mist.

The paused on the road at the turn where 82% of the trees are planned to be clear-cut. It’s one of the loveliest areas of the forest. 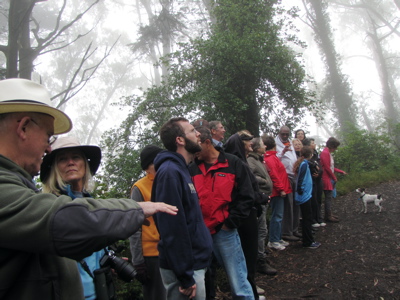 One observer had never been there and was amazed at the wonder of the forest. No one could understand why 1600 trees should be cut down and the others more made vulnerable to wind-throw.  Instead SF Recreation & Parks Department  has plans for tree-felling, habitat destruction, and a vastly increased use of toxic pesticides under the “Natural Areas Program.”

Even the (native) Pacific Reed Grass growing there – that’s a native plant – is a forest species, and thrives in the shade and moisture of the eucalyptus. Nature is opportunistic, and native and exotic species are part of a web of life that’s adapted to the conditions of this site. Non-native plants have added bio-diversity; according to Peter Kareiva, chief scientist at the Nature Conservancy, California now has 25% more plant species than it had before.