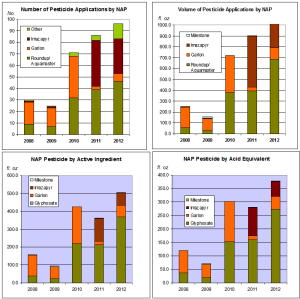 Our regular readers will know that we’ve been following the Natural Areas Program’s (NAP) increasing use of pesticides with some dismay. When we got the 2012 data, it was clear that pesticide use had increased by every measure. That story is HERE: Natural Areas Program Uses Even More Pesticides.  Imagine our concern, then, when the Sutro Forest Draft Environmental Impact Report outlined the amounts of pesticides they contemplate using as part of their destructive plan for the forest on Mount Sutro Open Space Reserve. It’s between 5 and 15 times the amount that NAP is using on all its properties. (Sutro Forest has been essentially pesticide-free since 2008.)

NAP’s own DEIR on the Significant Natural Resource Areas Management Plan – SNRAMP or Sin-Ramp – doesn’t quantify the amounts of pesticides it would need to implement its plan. But the Sutro Forest numbers suggest that we’re looking at multiples of their existing levels of use.

Like many, we’re very concerned about this pesticide use. It’s bad for human beings, for pets, for the environment and for wildlife. We recently came upon this excellent article by David Stang. It’s reprinted here with permission. Of the pesticides reviewed, NAP is using Milestone VM, Roundup (or Aquamaster, with the same active ingredient – glyphosate), and Imazapyr.  (Note: All the illustrations are ours.)

Because none of the tadpoles had legs before the spraying, they could not have developed into adult frogs and walked off. Nor could any predator have managed to get every single one of them. And a “control group” — waterways not affected by pasture runoff — still had the tadpoles they had before this spraying. Adult frogs may have been killed as well – the evenings at the ponds after spraying were much quieter than just prior to the spraying.

We could suspect that pasture runoff of Milestone VM into our ponds is the culprit. A literature search confirms this hypothesis (see below).

Studies have shown that herbicides and pesticides may have both direct and indirect effects on tadpoles:

The known dangers of herbicides for frogs and toads is acknowledged by the National Park Service which, for Yosemite National Park, required that “Herbicides will not be applied within 750 meters (2,500 feet) of known breeding habitat for the Yosemite toad.”7

Where pasture runoff flows into streams, ponds, or even ditches, the use of herbicide or pesticide in our pastures should be suspended until the dangers of any proposed substance can be carefully evaluated. 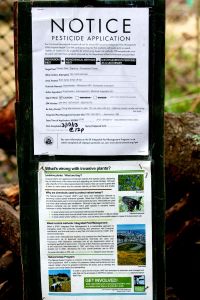 Aminopyralid dissolves very easily and is persistent in water. It has high leachability and mobility. It is toxic to algae, oysters, aquatic plants8, fish, honeybees and earthworms9.Aminopyralid is also on PAN International’s List of Highly Hazardous Pesticides10.

Recently aminopyralid was at the center of public and media attention in the United Kingdom. Gardeners discovered that using manure from animals that grazed on or were fed hay from aminopyralid-sprayed roadsides caused their garden crops to fail or develop abnormally. In fact, the University of Minnesota Extension Service describes this problem in their fact sheet, “Use Caution When Harvesting and Feeding Ditch Hay.”11

Aminopyralid is of concern to vegetable growers as it can enter the food chain via manure which contains long lasting residues of the herbicide. It affects potatoes, tomatoes and beans, causing deformed plants, and poor or non-existent yields. Problems with manure contaminated with Aminopyralid residue surfaced in the UK in June and July 2008, and at the end of July 2008 Dow AgroSciences (the manufacturer of Milestone) implemented an immediate suspension of UK sales and use of herbicides containing Aminopyralid. A company statement explained: “Consistent with its long-standing commitments to product stewardship, and in cooperation with United Kingdom regulators, Dow AgroSciences has asked the Pesticide Safety Directorate (PSD) for a temporary suspension of sales and use of herbicides containing aminopyralid. The suspension shall remain in place until assurances can be given that the product and subsequent treated forage and resultant animal wastes will be handled correctly.”12

Of concern to all is the 2005 claim by the EPA that “There are no acute or chronic risks to non-target endangered or non-endangered fish, birds, wild mammals, terrestrial and aquatic invertebrates, algae or aquatic plants”13, despite the fact that the EPA report cites studies such as “Acute Toxicity to Larval Amphibians Using the Northern Leopard Frog, Rana pipiens, as a Biological Model.”

Even if Milestone/aminopyralid were safe for tadpoles, it would only be when applied at recommended doses to non-sloping land. The recommended dose is just 7 fluid ounces per acre, according to the EPA.14 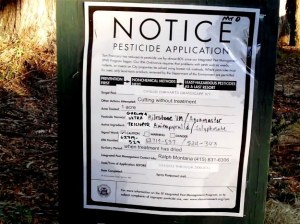 Three of the Four on Mt Davidson

Roundup contains glyphosate as its active ingredient. Glyphosate dissolves readily and is very persistent in water. It is toxic to birds, fish, honeybees and earthworms15and is listed by PAN International as a highly hazardous pesticide16. Its maker, Monsanto, was convicted of false advertising in 2007 for its claim that Roundup was “practically non-toxic” to mammals, birds, and fish.17 Some of the scientific evidence for the safety of Roundup comes from studies with falsified results.18

The U.S. Environmental Protection Agency (EPA) has identified 76 species that may be endangered by glyphosate use19.An important study has shown that glyphosate kills tadpoles20. A University of Pittsburgh biologist has found that the herbicide caused an 86-percent decline in the total population of tadpoles.21A recent study found that even at concentrations one-third of the maximum concentrations expected in nature, Roundup still killed up to 71 percent of tadpoles raised in outdoor tanks.22

Out of concern for these issues as well as human health, European Union member states are warned that they “must pay particular attention to the protection of the groundwater in vulnerable areas, in particular with respect to non-crop uses,” when using glyphosate23.According to EPA, short-term exposure to elevated levels of glyphosate may cause lung congestion and increased breathing rates and, in long-term exposure, kidney damage, reproductive effects24. Glyphosate has also been associated with Parkinson’s disease.25Increased adverse neurologic and neurobehavioral effects have been found in children of applicators of glyphosate26.Female partners of workers who apply glyphosate are at higher risk of spontaneous abortion27.Some glyphosate-based formulations and metabolic products have been found to cause the death of human embryonic, placental, and umbilical cells in vitro even at low concentrations. The effects are not proportional to glyphosate concentrations but dependent on the nature of the adjuvants used in the formulation.28 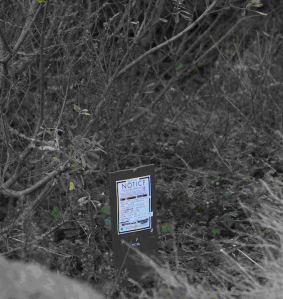 Powerline and Arsenal contain the active ingredient imazapyr, which has been listed for withdrawal from the market in the European Union.29It is highly soluble and moderately persistent in water. It is also toxic to fish, honey bees and earthworms30. Imazapyr’s potential to leach to groundwater is high and surface runoff potential is high31.One field study found that between 40 and 70 percent of applied imazapyr leached down to the lowest depth tested32. If imazapyr leaches down below 18 inches (where microbial activity is limited) the chemical can be expected to persist for more than a year33.EPA cautions that imazapyr-based herbicides can place terrestrial and aquatic plant species in “jeopardy.”34

Tordon K has the active ingredient picloram. Picloram is a persistent herbicide that is highly leachable, very soluble in water and does not degrade readily in water. It is toxic to birds, fish, honeybees and earthworms. It has also been identified as an endocrine disruptor3536and is on PAN International’s List of Highly Hazardous Pesticides37.EPA’s evaluation of picloram states, “eventual contamination of groundwater is virtually certain in areas where residues persist in the overlying soil. Once in groundwater, the chemical is unlikely to degrade even over a period of several years.”38

Anyone who would advocate against herbicides will face the might of organized agriculture, the lawn care business, and even the EPA. A paper on the Environmental Safety of Forestry Herbicides39, for instance, argues that the herbicides named in the present article – imazypyr, glyphosate, and picloram, as well as many others – are “less toxic than caffeine”, “less toxic than aspirin” and “are safe for animals because the biochemical basis for toxicity does not exist.” The article goes on to claim “herbicides positively affect water quality by reducing sedimentation rates.”

I’d like to think that we could send herbicides to the last roundup. But it seems more likely that herbicides will continue to send wildlife to that roundup.

35 Endocrine disruptors interfere with the endocrine glands that produce hormones that guide the development, growth and reproduction in people and animals. Disruption of hormones, which guide growth, development, intelligence, and reproduction, can result in irreversible harm, which is passed on to future generations.