Bats are insect-eating machines. According to the USGS, “Bats normally eat about half their weight in flying insects each night.”  So even for those who don’t find these night-flying mammals charming, it’s good to know there are bats among us.

San Francisco has at least four species of bats, all of which eat insects. According to research by Jennifer Krauel, which involved recording bat sounds to determine which species they were, Mexican Free-tailed bats are the most common. Parks with water – like Glen Canyon – also have Yuma Myotis bats. The other two species she found (more rarely) were Western Red Bats, and Little Brown Bats, and she found them in just a couple of places.

Her research indicated that “amount of forest edge and distance to water were the factors best explaining species richness and foraging activity.”  It also showed that bats in San Francisco remain active through the winter and don’t hibernate or move elsewhere.

If you’re interested in reading her paper, it’s here as a PDF: Jennifer Krauel thesis on bats in SF

Glen Canyon’s bats are often visible at dusk. They’re most evident in the Fall, though they’ve been seen at other times of the year.  (The pictures above are from February and April, those below from October.)

Here’s a note on bat-viewing from one visitor to Glen Canyon.

“It was late in the afternoon, and late in October. We were standing around the entrance to the park on Alms Rd.  As dusk fell, bats emerged from the tall eucalyptus trees. Quite suddenly they were  in the air right above us. I pulled out my camera, which is not really good in poor light but I tried to take some pictures anyway. Here’s one: 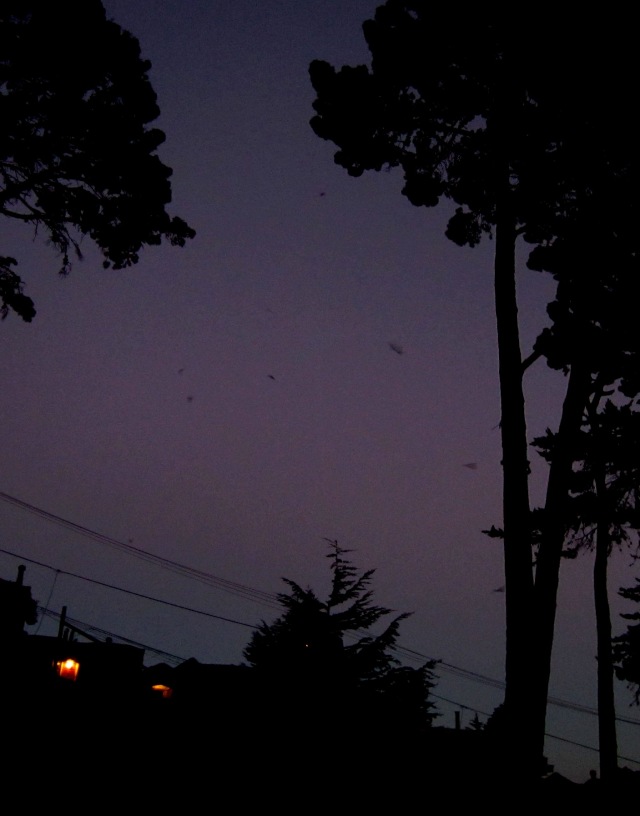 “They’re difficult to spot in the picture, but all those black smudges are bats that were moving too fast for my pocket-camera. Here’s the same picture, cropped, with the bats circled in yellow:

“They dispersed over the canyon. Here’s another picture from a few minutes later (and the one below it shows where the bats are).

“It was fantastic. I haven’t seen this many bats anywhere in San Francisco.”

We did a little research, and found a Stanford report that emphasized the importance of large trees to a particular species of bats, Yuma Myotis… bats that Krauel’s research had actually found in Glen Canyon Park.

“Yuma bats that forage in the preserve travel several miles to roost in large trees in Portola Valley and Woodside, suburban communities on the San Francisco Peninsula. The average diameter of the bats’ chosen trees is about a yard across — more than three times wider than the average tree in those areas.”

(The link to the abstract of the actual Stanford research paper is HERE.)

That’s the size of the big eucalyptus trees in Glen Canyon Park – including those that SFRPD wants to chop down.

Bats are an important part of an eco-system, and fill a role few other creatures do: They hunt night-flying insects like mosquitoes that birds don’t catch because they’re sleeping. This is especially important now as West Nile virus, a mosquito-borne disease, has been spreading.

Having bats in a landscape contributes to its bio-diversity. All species of bats are protected in California.

(Some people are concerned that bats carry rabies – and it’s true no one should handle bats, especially grounded bats that may be sick, with their bare hands. But according to the California Department of Fish and Wildlife, less than 1% of bats are infected. [Click HERE to see their note.]  The risk of getting rabies from a bat is less than the risk of being struck by lightning.)

HOW WILL SF RPD ENSURE THE PRESERVATION OF THE BATS?

We’re concerned about the impact of the planned tree removals on Glen Canyon’s bats.

How is SF RPD going to ensure the protection of these bats?

And in what ways will felling large trees near the stream alter the ecology of the canyon?