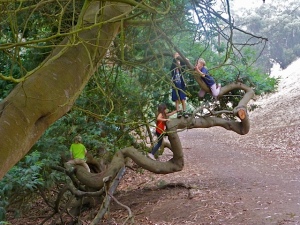 We’ve said before that we’re concerned the San Francisco Recreation and Parks Department (SFRPD) is using capital projects in our parks to start implementing the Natural Areas Program (NAP) even ahead of the completion of the Environmental Impact Review. Most of this is under the guise of “forestry” and “trails.” But sometimes, it’s even merged into projects that don’t appear to be about  NAP at all.

Glen Canyon Park is one of those.

At first, there seemed to be no reason for concern on this score. When SFRPD applied for an exemption under the California Environmental Quality Act (CEQA) – one of the things it needed for a permit to improve the playground and the tennis courts in Glen Canyon – it stated: “The proposed project would be located on the flat programmed area of the park and would not involve any work in the Glen Canyon Park Natural Area.”

In a letter addressed to the Glen Park neighbors, District 8 Supervisor Scott Wiener repeated this assertion:  “The issue here is not the broader Natural Areas Plan, and the improvements in Glen Canyon are not related to that Plan.”

We can only imagine that he read the same document, and also assumed it was accurate.

BUT IT’S NOT TRUE

In fact, the project is not confined to the “flat programmed area of the park” and it does involve work within the Natural Areas. Most of the trees to be felled are in fact within the Natural Areas. SFRPD says will replace them with 163 new trees, that “range in size up to 100 feet at maturity.” But we’ve seen, from their planting plans, it actually includea a very large percentage of bushes (like flannel bush) and small trees (like madrone) and only six trees that would be around 100 feet in size. [We wrote about that HERE.] 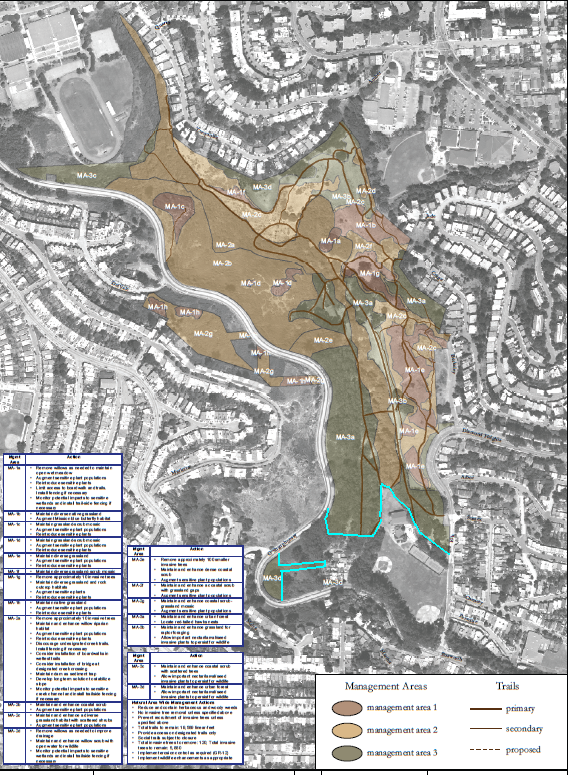 Here’s a map showing the project area for the Glen Park Rec Center project that is imminent. [Edited to Add: This map has been updated with further information and to show the Project areas boundary (light blue) as well as the Natural Areas boundary (pink) on the same map.] 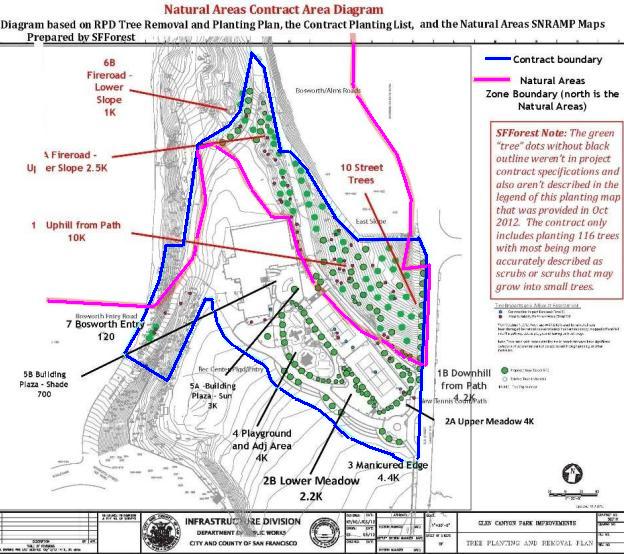 It’s obvious from this map that quite a large chunk of the project area is not in the “flatlands” but instead falls into the Natural Area.

WHAT ARE THE PLANS FOR THE NAP AREA?

Those are the areas where they will be cutting down trees and replanting it with scrub.

This explains the preponderance of Native Plants and bushes in the planting plan. They’re not replacing the majestic eucalyptus and quirky acacia with tall trees, those “ranging up to 100 feet tall” that Karen Mauny-Brodek mentioned.  Those will go near the new playground and along the street.

Instead, these areas advance the Native Plant habitat conversion agenda. They will be replanted with native bushes and small trees/ shrubs as envisioned in NAP and spelled out under the Significant Natural Resources Management Plan (SNRAMP, Sin-Ramp). Only, the SinRamp is still under Environmental Review; the Environmental Impact Review has not been finalized yet, nor has it been approved. This is getting in under the radar.

The Draft Environmental Impact Report (DEIR) on the Sin-Ramp considered 4 alternatives to the SNRAMP:

(1) No Project – which would mean NAP would continue doing what they planned under an earlier plan, the 1995 plan;

(2) Maximum Restoration – which would mean converting the entire 1100 acres under the Natural Areas Program to scrub and grassland, and putting in access restrictions;

(3) Maximum Recreation – maximizing recreation except where it interferes with existing native plants and federally-protected species;

(4) Maintenance – Maintain the current distribution of native and non-native species in the Natural Areas; no habitat conversion.

What is currently happening would actually be consistent with the worst of these options – the Maximum Restoration option. It tries to create a native garden of scrub on the slopes to the east and north of the Recreation Center.

When this happens, we can expect to see the usual Natural Areas effect:

By end-September 2012, the Natural Areas Program had used more pesticides than in the whole year in 2011 and in any previous year from 2008, when we first obtained the records. No one has any way of knowing how much more is being used by supporters of Native Plants.

We find this process disturbing. SFRPD is using popular projects like playground improvements as a stalking horse for their controversial  habitat conversions under NAP.

One of the doomed trees