Fire at McLaren Park: Letter from a Park-Lover

We received this letter from a frequent visitor to McLaren Park. It’s published here with permission and minor edits. 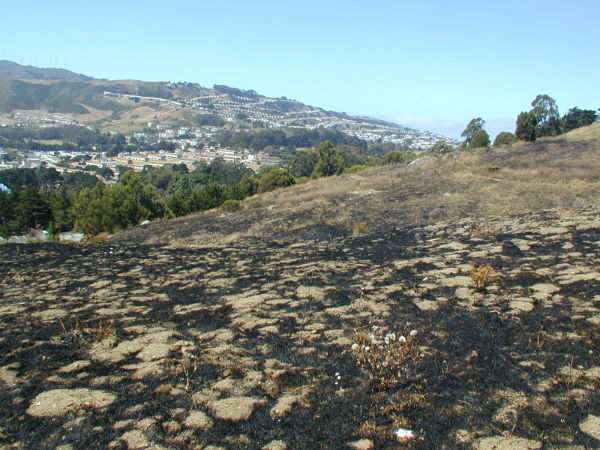 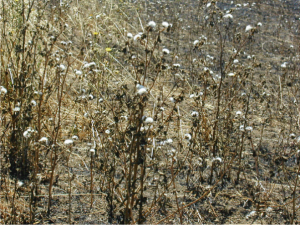 I was at McLaren a few days ago and the seasonally dry, “Natural Areas” grassland south of Mansell is burnt. I can’t find anything on the web about the fire but it looks like it started about 50 feet from a homeless encampment at the bottom of the hill close to lower Visitacion.  (It also could have been started by fireworks.)

Unlike the Stern Grove fire last week, which burned a small area in the ivy-covered forest, the McLaren grass fire burned a pretty large area – I’d guess 5 to 8 acres. Interestingly, a few coyote bushes burned but most didn’t. The non-native dandelions and bull thistle seeds did not burn, and were blowing across the burnt area. Loads of birds were eating the white fuzzy seeds. It will be interesting to see what the grassland looks like as it grows back. 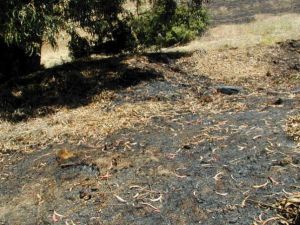 Burning certainly is a concern in the city but fire was a key part of the Native American ecosystem when Europeans arrived.

Fire, missing grazing, large predators, climate changes, and air pollution, are all reasons it is futile to pretend San Francisco Native Heritage can be restored.

In the forest south of Mansell,  I saw several young pines, which contradicts a Rec & Park forestry report that says pines and cypress are not naturally regenerating in San Francisco parks.  (I’ve also seen young cypresses deep in the forest at Mt Davidson.  Sadly, even when I showed a seasoned Native Plant Advocate the young cypresses and eucalyptus, he still insisted that trees can’t regenerate in the forests and the forests are unsustainable.) 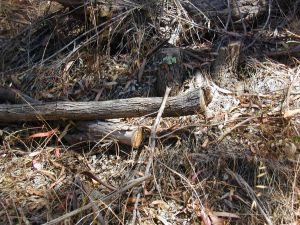 San Francisco is paying millions for “reforestation” projects at the same time they are cutting down healthy pine trees and self-sustaining forests?

Of course, even Rec & Park can’t deny that eucalyptus is self-sustaining because of the young sprouts throughout the park forests that they haven’t managed to cut down.  It is so sad to see the many poles of young pines and eucalyptus cut and lying on the ground in piles of dry leaves throughout the McLaren forests. Are the Natural Areas “volunteers” or staff surreptitiously implementing the Natural Areas tree-thinning program even before the environmental impact report is completed?

Strange that the city spends millions for a plan and draft environmental impact report but appear to be moving forward with their plans as if it is just an expensive formality.  What is sad is the proposed plan isn’t even the “environmentally superior plan” per the city’s own analysis.  It is bizarre that native plant advocates have hijacked the term “environmentalist” to mean native plants.  Other cities recognize the health and environmental benefits of a healthy forest, while “environmentally conscious” San Francisco is deliberately chopping healthy trees down as if they are garbage.

The road/trail at the bottom of the hill also has fennel sprayed with pesticides along the trail right above the homeless encampment, which is visible from that trail. I wish Rec & Park would clean up the garbage that they walk by instead of spending their time spraying pretty, green fennel. 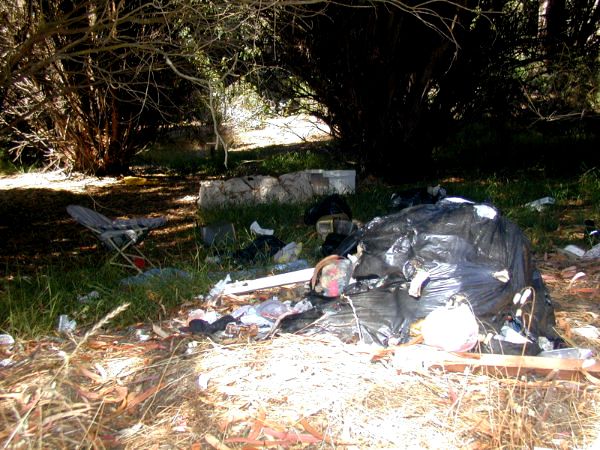 Garbage left from a homeless encampment near the trail/road.

I really think it is disturbing that the Natural Areas are the only parks exempt from any maintenance standard, even the one that says no more than 15 pieces of litter visible in a 50′ by 50′ area.   This means Rec & Park has exempted one-fourth of the land managed by Rec & Park from the voter-passed Prop C requirements for park maintenance standards and monitoring.

A few months ago, I broke my habit of walking the trails between the reservoir and the tennis courts for the less-travelled trails of McLaren.  I particularly love the rolling hills with flocks of birds, trees, wildflowers, and meadows and that our walks are so much longer.  However, I’m not as thrilled about spending much of my walk trying to make a dent in the accumulated litter.

I’m surprised anyone was taking the trails, considering the uninviting litter accumulated at the Visitacion Avenue/Mansell Street entrance.  I cleaned about half, but the other half still looks like a dumping zone in an abandoned park.  It makes me appreciate the daily dog-walkers and others that clean up in the more-travelled park areas.  At least Rec & Park should routinely pick up at the entrances and parking areas and keep them relatively clean.

On the other side of McLaren in the forest area, I found a volunteer working alone, pulling up the English ivy from the forest floor to leave bare ground. He has, he said, a “permit” from Rec & Park and has been trained to pull the ivy and that it is overrunning the park.  I’d personally rather see green ivy than bare ground covered in pine needles.  Especially since ivy, which flowers and bears berries early in the season, provides some wildlife food and shelter, absorbs carbon dioxide and air pollution, and makes the park feels more alive.

It is quite bizarre that Rec & Park and native plant advocates claim nothing grows under the non-native trees.  In reality that is true only because Natural Areas contingent is out there constantly pulling up the dense and diverse vegetation, which is prolific in eucalyptus, pine and cypress forests that are left natural or are lucky enough to be protected in Golden Gate Park.  (I still find it bizarre the maligned “invasive” plants and trees protected in one of San Francisco’s most precious gems, Golden Gate Park, are being sprayed, pulled and cut in neighborhood parks.)

When I mentioned that the Natural Areas plan has not been approved, he said it was okay to proceed because the plan was developed long ago. He implied dog people are the problem and that it wasn’t right that the dog people think the area is just for them. I said that people with dogs are about 40% of the population. Did having a dog mean that one shouldn’t have a voice in how the parks are used?

I wonder how many people are native plant gardening purists who want trees removed simply because they aren’t San Francisco Native Heritage?  Dog play areas are only about 100 acres, yet  native plant advocates call people with dogs greedy while The Natural Areas Program claims over 1000 acres. It’s concerning to take a dog or a child to an area that has been sprayed with herbicides.

Sadly, I saw at least 4 places with glass in the parking lots from broken car windows. (It’s the first time I’ve personally seen that at McLaren.) The broken glass and homeless encampment suggest that what McLaren Park really needs to make it safer is more visitors, not fewer trees, dogs or activities.

1 Response to Fire at McLaren Park: Letter from a Park-Lover