Here is a Bewick’s Wren. In the few minutes that I watched it, it and it’s mate made 30 or more trips to this exact same location, each time carrying another insect in it’s beak. They were obviously feeding their young — the nest is located in the hollow under some English Ivy that has grown to cover a tree trunk. The tree trunk is in a forest next to a naturalized grassland.

What is interesting is the incorrect description of this bird sent to me by an “informed” birder and nativist:

These are mostly sedentary (non-migratory) birds that are now quite rare in San Francisco. They can still be found in the Presidio, Fort Funston, Bayview Hill, McLaren Park, Glen Canyon. There has been one singing on territory on Mt. Davidson for about a month and I saw it with a second bird a few weeks ago. This would be the first confirmed nesting of this species up there. They appear to be responding to the restoration that’s taking place there as this is a bird that shuns forests but prefers wooded edges near scrub. They are cavity nesters and will use any sort of cavity natural or artificial. Definitely not an English Ivy obligate, without the ivy they would use another cavity.

I think the description is the birder’s preferred habitat for this bird! He is a nativist who would love to believe that all birds prefer native plants over non-native ones. But obviously, this is not what the bird itself has chosen.

There has been clearing in this forested willow area during the last 4 months — though fortunately not in the small patch where I found the bird. Large five-foot swaths have been cut through the area. The Ivy and Blackberry brambles and underbrush — in other words, the wildlife habitat — have and are being cleared by the Natural Areas Program (NAP) staff during the nesting and denning season, when the grant that is paying for this specifically stipulates that clearing may only take place during the summer and fall months, so as to prevent disturbance when these animals are producing and raising their young. The clearing and application of poisons started in November and has continued through the first week of April. This dense wildlife habitat contains not only a vast number of bird species, but also raccoons, coyotes, opossums and squirrels.

We were told by the NAP management, that since “the staff” didn’t find any dens, they felt entitled to clear. They didn’t even look for nests. They should know, that by the time you bushwack an area to locate a den — a den that has been carefully chosen and worked on so as to prevent detection — you have already intruded too far. The NAP staff needs to leave our thickets alone, especially during nesting season — stay away and let nature work its magic.

NAP management apparently felt that using up their grant money was much more important than protecting the wildlife we have. 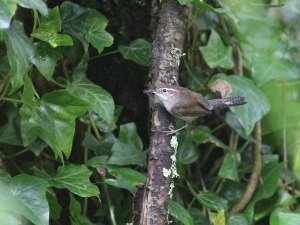 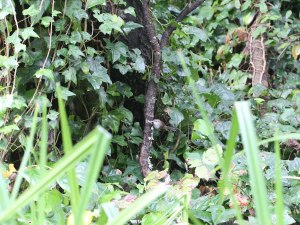 This entry was posted in "Natural" Areas Program. Bookmark the permalink.

1 Response to Nesting Bewick’s Wren in a “Naturalized Area”